+1/+1 counters are the most common counter type in Magic. They were introduced in Alpha. A +1/+1 counter on a creature adds one to its power and toughness. Creatures using +1/+1 counters were among the most popular in the early history of the game.[1]

For ease of comprehension, blocks tend to focus on only a single type of counter on creatures, and +1/+1 counters are the default choice.[2] When +1/+1 counters are absent from a block, they are most commonly replaced by their inverse, -1/-1 counters. Occasionally, thematic counters are used instead, such as the ki and divinity counters of Kamigawa block.

As a further concession to mitigate complexity, +1/+1 counters and -1/-1 counters are the only power and toughness altering counters used in new products.[1] Additionally, they are never used in the same block, to minimize confusion in limited play.[3][4] A small handful of cards from the earliest sets still use other, obsolete counters.

When both +1/+1 and -1/-1 counters are present on the same creature, they are immediately removed in matched pairs until only one or the other remains. 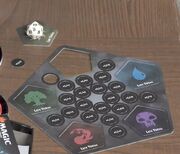 +1/+1 counters are a component of many ability words, keyword abilities, and keyword actions. Their ubiquity is largely due to their lack of flavor, and enables a high level of compatibility between thematically unrelated mechanics.[5]

They are used by the following mechanics: