-1/-1 counters are the second most common counter type in Magic, following +1/+1 counters. They were introduced on the Arabian Nights card Unstable Mutation,[1] and were used as major set themes in Shadowmoor, Eventide, Scars of Mirrodin block, and Amonkhet block. 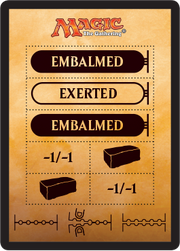 Punch card from Amonkhet with -1/-1 counters

-1/-1 counters appear in all five colors, but are primarily in black and secondarily in green. Flavorwise, putting -1/-1 counters on a creature usually indicates a character being scarred or infected. Shadowmoor's design used replacement effects to signify "damaged" creatures, with the few ways to remove counters flavored as "healing" effects. Scars of Mirrodin used them aggressively on opponent's creatures as "infection", which grew worse with the effect of proliferate.

For ease of comprehension, blocks tend to focus on only a single type of counter on creatures. -1/-1 counters are used less often than +1/+1 counters because they have less available design space, due to their similarity to +1/+1 counters and their capacity to kill creatures and hence a finite number of counters on any given board state.[1][2]

As a further concession to mitigate complexity, +1/+1 counters and -1/-1 counters are the only power/toughness altering counters used in new products.[1] Additionally, they are never used in the same block, to minimize confusion in limited play.[3][4] A small handful of cards from the earliest sets still use other, obsolete counters.

At least one set between 2015 and 2022 was expected to use -1/-1 counters.[5] That set was later revealed to be Amonkhet, which returned to the "scarred" design usage, but with the additional twist of having the effect target, resulting in a flavor of mercilessly passing one's own curse onto others.[6] -1/-1 counters are currently ranked at a 2 on the Storm Scale.[7]

When both +1/+1 and -1/-1 counters are present on the same creature, they are immediately removed in matched pairs until only one or the other remains.

Because +1/+1 counters are the default creature counter,[8] -1/-1 counters have been used by far fewer mechanics. There are currently three keyworded mechanics using -1/-1 counters, all of them from Lorwyn–Shadowmoor block or Scars of Mirrodin block:

Ruthless is the mechanic that Amonkhet block used, however it is not officially named.