This was the first World Championship after the birth of the Pro Tour, and it was the event that concluded the Pro Tour season. 125 players competed, and the tournament featured three formats: Booster Draft, Standard, and Legacy. In the final, once again a relatively unknown player prevailed, with Australia's Tom Chanpheng taking down the widely considered 'best in the world' at the time, Mark Justice.[1] Chanpheng's win was commemorated with a unique card, 1996 World Champion.[2] 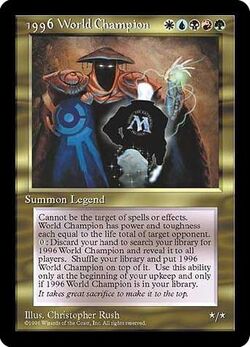 4 Order of the White Shield

Of interesting note is that Chanpeng's winning deck included no sources of blue mana, though it included Sleight of Mind. This stems from an error in his submitted decklist. He was forced to use plains in lieu of the 4 Adarkar Wastes he had planned to include.

The results of the Team World Championship were: