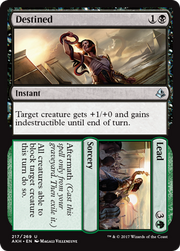 Aftermath is a keyword ability introduced in on split cards in Amonkhet.[1] Aftermath is spread equally through the colors.[2][3]

Aftermath creates virtual card advantage. The big difference between aftermath and the similar flashback is that with aftermath, you get a different card than what you cast the first time.[6]

Aftermath
A keyword ability that lets a player cast one half of a split card only from their graveyard. See rule 702.127, “Aftermath.”

Instant
Target creature gets +1/+0 and gains indestructible until end of turn.
Lead

Sorcery
Aftermath (Cast this spell only from your graveyard. Then exile it.)
All creatures able to block target creature this turn do so.

In practice, the people who named the cards used different meanings of the word "to". While this works in the English language, this has proved to be problematic in translation. It is unknown if Aftermath cards will return; and if they do, if they will use a single meaning of the word "to"; but as is, it can't be said that there is a coherent naming convention for them in non-English languages.

Other phrases are more difficult:

And a number of phrases switch around the position of the two words and put the to at the front: