Algenus Kenrith is the High King of the Realm on Eldraine.[1] He is the husband of Queen Linden Kenrith, and the father of Erec, Hazel, Rowan and Will Kenrith.

Algenus is a middle-aged, bearded man with a blond beard, and a heartfelt, guileless voice. A modest gold circlet usually crowns his head, hard to see against his golden-blond hair. He is always smiling and is known for his courage, skill, and attractive laugh. He is renowned as a canny fighter, only bested by his wife Linden. Many have noted his sixth sense regarding danger and his peculiarly keen ability to react at speed to changing surroundings. On the other hand, he can sometimes have a temper and act impulsively. He is the only person in the Realm to have earned knighthoods at all five courts. He loves his wife and children and he isn't a particularly inquisitive or deep-thinking man — he leaves that to his wife.

The High King's entire purpose for existing is to keep the Wilds in check by expanding the orderly peace of the Realm.

As a humble young man from Kenrith, Algenus had been chosen as one of the two candidates to quest for the high rulership. The Questing Beast had given both Linden and him blessed swords as the mark of its favor, each imbued with the power to bestow life. Algenus and Linden both quested for years after they had been chosen. In the course of time, they fell in love, but they weren't always questing together. 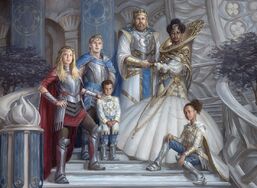 In Linden's absence, Algenus became enthralled by a witch on the border between the Wilds and the Realm. The witch became pregnant with Rowan and Will and killed the twins for their blood, which she intended to drink to extend her life. A kiss from Linden broke the spell on Algenus and she gave up her sword's power to restore life to the twins, raising them as her own children when she married Algenus. Unlike his wife, Algenus completed the High Quest and he was proclaimed the High King of the realm.

Almost eighteen years later, Algenus was abducted by the anarchist Planeswalker Oko and turned into a magnificent stag. His children Rowan and Will Kenrith managed to find him in the Wilds, but couldn't prevent him from being mortally wounded by Oko, masquerading as Queen Ayara, during the Wild Hunt. As there was still life in Algenus's own sword, Linden used it to return him to the world of the living as day broke across Eldraine.