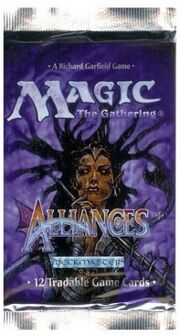 Alliances is the eighth Magic expansion and was released in June 1996 as the second set and first small expansion in the Ice Age block.

The Alliances lands have a unique violet-colored text box and Alliances is the last expansion set to have this feature. The Mirage and Visions sets share the same color scheme, and from Fifth Edition on, land text box color was standardized.

Alliances was released eight months after the less-than-spectacular Homelands, which is the longest gap between expansion sets in the history of the game. Prior to the Coldsnap release it was the third and final set in the Ice Age block with Homelands being the second set.[7] It was sold in booster packs of twelve cards which included eight commons, three uncommons and one rare.[8] A booster box contained 45 booster packs. This was the last time that boosters contained twelve cards. All boosters feature the same artwork from Benthic Explorers.

This was the last expansion to feature regular multiple artworks on cards. The practice was discontinued to ease the identification of cards by their artwork, which was important to the global community as Magic was beginning to see print in languages other than English.

Alliances is also the last standard Magic expansion that was under-printed, as supply did not meet demand in many areas. Alliances was highly anticipated after the long wait from the release Homelands.

After the planeswalker Freyalise cast her World Spell, thereby ending the Ice Age, a population long adapted to the cold had to re-adjust to warm weather. With the new climate came devastating floods and plagues, and the necromancer Lim-Dûl has built an army of undead bent on world domination. An alliance is formed between races to defeat Lim-Dûl and his army.

Alliances didn't introduce any new keywords, but it did introduce the popular alternate cost mechanic, popularly referred to as "pitch cards", that allowed a player to discard cards of specific colors (and in the case of two cards, with an additional life payment) to cast a spell instead of paying its printed mana cost. In Magic: The Gathering history, this mechanic, or a derivative or variant thereof, appears on rare cycles in the Masques block, the Betrayers of Kamigawa expansion, and the Coldsnap expansion.

Alliances builds on many of the themes of the Ice Age block. Cumulative upkeep and cantrips return, as does the allied color theme and a few new legendary creatures. The Snow mechanic on only a few cards.

Alliances was the second expansion by the quartet known as the "East Coast playtesters",[9] which also designed Ice Age. While it was sold as an Ice Age expansion, design diverged from it. For example, the Snow mechanic was considered a failure, and it was completely ignored. The vast majority of the mechanical tie-ins were added in Development, including a few Snow-matters cards because the mechanic rated highly on flavor.[10]

At some point, Continuity (the department responsible for the storyline) decided that Alliances would have a race of sentient gorillas. The design team thought this was a silly idea and protested by renaming all the cards in the set to have "Gorilla" in their names.[11][12]