Edit this Page
watch 02:34
Fire Emblem Warriors: Three Hopes - The Loop
Do you like this video?
Play Sound
Alpha
Trivia

Limited Edition Alpha, commonly known as Alpha, is the first print run of Limited Edition, the first core set of Magic: The Gathering. Alpha contains 295 black-bordered cards and was released on August 5, 1993.[2][3]

Alpha is actually a nickname, but widely accepted as the name for this print run of Limited Edition.[4]

Alpha cards can easily be distinguished from Beta and all other cards by their more rounded corners. The radius of these corner was about 2 mm instead of the 1 mm which has been standard since then.[6] Early tournament rules required that all cards must appear unmarked without the use of protective sleeves, and the unique corners of Alpha cards originally made them marked cards in a deck not entirely comprised of Alpha cards. This initially made them less desirable and thus less valuable than Beta and even Unlimited cards.

Due to the printing process, it is possible to get land cards in a rare, uncommon, or common card slot. The chance is approximately 4.13% for rares, 21.5% for uncommons and 38.84% for commons. This is because they put lands on all three print sheets. However, as part of the idea to keep players from guessing rarities, the only lands on the rare sheet were five copies of Island.[7][8]

Alpha contained a number of errors that were fixed in the second, or Beta release: Circle of Protection: Black and Volcanic Island were accidentally left out of the set entirely.[9][10] Additionally, only two versions of each basic land with unique artwork were included.

Magic: The Gathering received its "The Gathering" subtitle for two reasons. First, "Magic" was thought to be too generic a name to trademark. Second, it left open the possibility for future expansions to have other subtitles, such as "Magic: Arabian Nights".

The names of many cards were initially very generic, such as "Angel" instead of Serra Angel and "Skeletons" instead of Drudge Skeletons. Adding these descriptors created more flavor on the cards and allowed other types of angels, skeletons, and everything else to appear in future expansions.

The rarity of many cards was based on the idea that players would have a limited set of cards in a particular area, such that there would only be a few copies of Mox Sapphire or Black Lotus in a particular area, thus naturally restricting the power of these cards. The rapid popularity of the game created a much larger community of players than initially considered, allowing players to amass large collections of these powerful cards.

The rule limiting only four copies of all cards except basic lands in decks did not exist in the earliest rules but was rapidly adopted from tournament play.

Under the original rules, players with life less than 1 were not considered to have lost until the end of the current phase, giving that player a chance to find a solution.

Ante was an optional part of the original game of Magic that remained a part of the game until after the Homelands expansion.

Interrupts were similar to modern instants, only "faster." This meant that when an interrupt was played, only other interrupts could be played in response. The timing rules of interrupts caused some other cards (such as Red Elemental Blast) to be interrupts for them to work properly under these rules.

Wall was the only creature type with a rule associated with it: Walls can't attack (after errata, they have defender). This rule remained a part of the game until the Champions of Kamigawa expansion.

From a modern developer's viewpoint, some of the cards in Alpha were grossly miscost and others were complicated implementations of ideas that could be made into cards more simply.[11] Many cards and abilities were phrased in a looser way, sometimes describing abilities in flavorful rather than mechanical terms, which resulted in convoluted rules text when converted into more modern and precise rules templating. 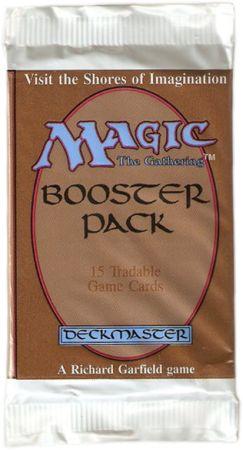 Alpha was released at Origins in July/August 1993 with a small run of 2.6 million cards. Cards were sold in 60-card starter decks and 15-card boosters. The set did not receive much exposure beyond the west coast of the United States. Cards were available from late August 1993 through late September 1993.[6]

The 32-page rulebook (added to the starter decks) had Bog Wraith on the cover and contained "Worzel's Story" by Richard Garfield.[5]

Alpha did not have a specific storyline, although the cards had a lot of flavor built into them based on the premise that players took on the role of a planeswalker who summoned creatures and cast spells in a duel against another planeswalker. Additionally, flavor text described the character of many people and places of Dominaria and elsewhere, and additional names were established in Alpha that were later expanded upon in further stories and expansions, notably Urza and Mishra among others.

Creature types were originally intended only to express flavor on creature cards, like flavor text. Thus, the intentional use of creature types to classify different races was not considered until around the design of the Fallen Empires expansion, despite cards like Lord of Atlantis that cared about a creature's race in this set.

There were numerous errors in Alpha, including the accidental omission of the cards Circle of Protection: Black and Volcanic Island. Many of these errors were corrected in Beta, although most of the misspellings of Douglas Shuler's name persisted through Beta and Unlimited before finally being corrected in Revised.