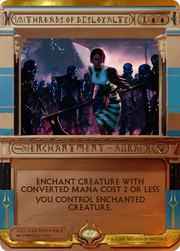 The Amonkhet Invocations have a very unconventional card frame which received a lot of criticisms from the community upon reveal.[8] Although the taste of card frame is subjective, the obscure display of the card name in pseudo-hieroglyphs was seen as a major setback for some players. The unclear theme, the choice of cards, and the cards' color distribution were also points of criticism.[9][10][11]