Anax was the legendary king of Akros on Theros, a brilliant tactician and warrior. He was the husband of Cymede.[1]

Anax was a follower of Iroas, but in his later years, he turned to Purphoros as he steered his people through the creation of a small empire. This shift was reflected in the Akroan artistry. Swords and armor were decorated. Pottery, clothing, wall paintings, and weaving showed ancient Akroan patterns and symbolism handed down for generations.

When Xenagos and his forces laid siege to the city of Akros, King Anax went forth in combat against Rhordon the Rageblood, an oracle of Mogis. In their battle, Anax gained the upper hand, but as Keranos provided aid to Cymede, the God of Slaughter gave a boon to Rhordon. Elspeth declared treachery as she sensed Mogis's interference. The Rageblood quickly defeated Anax by impaling the king through the stomach. Elspeth stepped forward and saved Anax, but before Elspeth could declare victory, the Rageblood threw himself into the advancing river elemental of Keranos and was washed away. Although King Anax was gravely injured, he supposedly survived and insisted that the victory celebration continue on without him.[2]

During the war between the gods, Purphoros reforged Anax into a demigod who can't think of anything but victory. Nevertheless, he repeats a single word: "Cymede".[3] 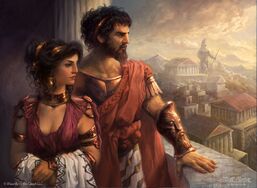