This article is about the 1998 box set. For other uses, see Anthology.

Anthologies is a box set that was released in November 1998, celebrating the fifth anniversary of Magic.

Anthologies contains two 60-card preconstructed theme decks made up of cards from every Magic expansion and edition from the Alpha set to the Urza's Saga expansion plus 5 token cards in each deck, and a 64-page booklet describing the past, present, and future of Magic, with personal commentary from Richard Garfield. The storage box is able to hold 350 cards in standard sized sleeves. The cards are white border with copyright 1993–1998.

Defenders of the Cause[edit | edit source] 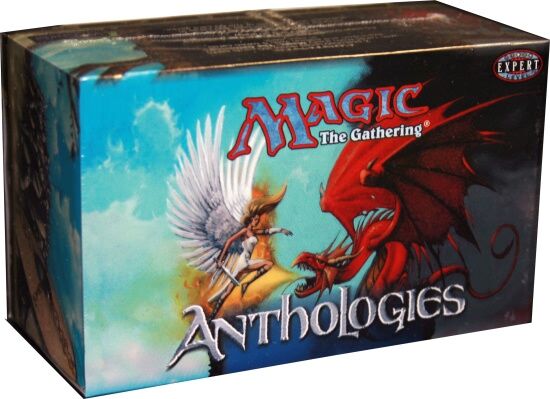 deck. If you're able to establish a stalemate on the ground, you'll be able to win combat in the air. Even if you need to hold your flying creatures back in defense, you have a stalemate breaker in Overrun.

Defenders of the Cause

1 Order of the White Shield

The rares in this deck are Armageddon, Brushland, Jalum Tome, Mirri, Cat Warrior and Sacred Mesa.

deck. When in doubt, attack. This deck is designed to win the "damage race".

1 Feast of the Unicorn

The rares in this deck are Goblin King, Goblin Warrens, Nevinyrral's Disk, Volcanic Dragon and Strip Mine.