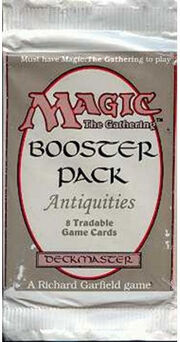 Antiquities is the second Magic: The Gathering expansion and was released on March 4, 1994. It is not considered part of any Block. The set was constructed around an artifact theme, and told the story of the Brothers' War between Mishra and Urza.

Antiquities was printed on sheets of 121 cards. The expansion symbol is an anvil, to symbolize the artifact focus of the set.[2] The set's rarity breakdown is: 28 commons (25@C4, 1@C5, 2@C6), 37 Uncommons (4@U2, 29@U3, 2@C1, 2@(U3+C1)), 20 Rares (20@U1). This strange distribution comes from the lands Mishra's Factory, Strip Mine, Urza's Mine, Urza's Power Plant and Urza's Tower which have four different pieces of art each. Mishra's Factory and Strip Mine have three versions at U1 and one at C1. Urza's Mine and Urza's Power Plant have two versions at C1 and two at C2. Urza's Tower has three versions at C1 and one at C2. This makes it so collectors view Antiquities as a 100-card set.

Every card in Antiquities either is an artifact or mentions artifacts in their rules text, except the lands which produce colorless mana and imply use to cast artifacts. The Antiquities lands have a unique rust-colored text box, which was reused in Fourth Edition and Chronicles.

Cards were available from mid-March 1994 through late April 1994. The print run was announced by Wizards to be 15 million cards. Antiquities was sold in booster packs of eight cards, which included six commons and two uncommons. Booster boxes contained 60 booster packs. The packs were not entirely random; players had to buy more than one box to complete the 100-card set. Wizards created the Antiquities Buy-Back program where players could send up to 100 cards back to receive cash back.[3]

Ancient artifacts of the Thran Empire are discovered on the continent of Terisiare, including many advanced machines of war. Two brothers, Urza and Mishra, discover a stone in the Caves of Koilos; but, when they disturb it, it splits in two—Mightstone and Weakstone—unleashing the evil of Phyrexia on Dominaria. The ancient machines of the Thran are employed in battle once again as the Brothers' War takes place, an epic war between Urza and Mishra for control of both halves of the stone. The war culminates in the Sylex Blast, plunging the world into the Ice Age. 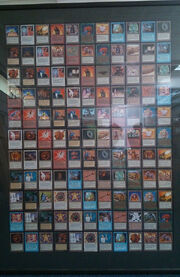 Antiquities itself has no cycles.

It does, however, contain Atog, which later became the first member of the "atog mega-mega cycle". It also contains Urza's Chalice which follows the theme of the Alpha lucky charms.