Arcavios is a plane introduced in Strixhaven: School of Mages.[1][2][3] The plane has two suns.[4]

The period when the plane was young and none of the humanoid races yet walked the earth.[5] 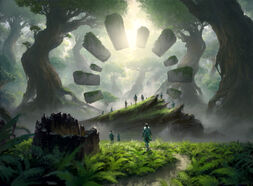 The five dragons were the first to master the magic of the five enemy color combinations. When the humanoid races arose, at first the dragons were angered that mortals would try to harness the wild forces of magic, but they came to realize that only through disciplined study would magic be in safe hands. So, centuries later, the dragons would found an institution devoted to the study of the five mana dichotomies, and that institution is what we now know as Strixhaven.

Gravity-defying arch shapes crop up all over this plane, looking like mystical shrines or monuments. They're made from spokes of natural materials that float in an arch shape, with a precise inner curve and a rough and irregular outer arch. They can stand straight or lie at an angle; they can be small or enormous, whole or broken, grown over or mysteriously clean. Their irregular spokes evoke the radiating lines of a shining celestial star.

The star arches are a mystery leftover from the Dawning Age when the plane was young and none of the humanoid races yet walked the earth. In most cases, the arches simply sit there, floating inexplicably, silent, immovable, and inert. But many have said that they've seen an arch appear to them at a critical juncture in their lives, helping them understand a lesson or answer a burning question in their mind. Some believe that each arch marks a place of great magic, such as the site of the birth of a great mage or the location of a time-lost spell. Others believe that they're connected with the Archaics in some way, some claim they've seen an arch come to life with powerful magic in their presence.[5]

Cervins feed on the mana-rich plants around the star arches, imbuing their bodies with extraordinary grace and vitality.[6]

Mana flows through all of Arcavios. But in certain sites, the mana becomes knotted and tangled. At these places, magic and spells can be at their most powerful and at their most dangerous. These places are known as Snarls. According to the Archaics, the Snarls are places where two conflicting sources of antagonistic mana overlapped together at the birth of the plane.[5]

The Archaics are a race of wise, giant, long-lived beings with an innate talent for magic. They can be seen striding through the Vastlands, exploring sources of magic with their many arms, or contemplating existence through their "eye," which is a magical focus of some kind. Archaics can live for thousands of years; many are thought to have been alive since the Dawning Age. Mages seek out Archaics for their vast knowledge of history and magic, but Archaics tend to communicate in obscure allusions and cryptic metaphors.[5]

Before Strixhaven was founded, Arcavios experienced a period of tremendous violence known as the Blood Age. The wars were so terrible that they shock even Lorehold students of today. The Founder Dragons brought the Blood Age to an end.

The Founding of Strixhaven

Founded some 700 years ago by the five spellcasting Founder Dragons, Strixhaven University is Arcavios's premier institution of magical learning, drawing promising young mages from all around the plane to study in its halls. Strixhaven is divided into five colleges, each with its own campus, faculty, and magical specialties. The five colleges were based around the magic mastered by each of the dragons. The mission of Strixhaven University is to discover and preserve magical knowledge, disseminate that knowledge from one generation to the next, promote the free and open study of magic in all its forms, and enhance the lives of people throughout the plane through the use of magic.[5]

To this day, the Founder Dragons roam the plane, the five deadly sages of the skies. They no longer associate directly with Strixhaven, preferring to let the deans of the college speak in their stead. The dragons' wisdom is vast, but their tempers can be short. Mages seek them out only to learn the most elusive of secrets.

A select few of graduates of Strixhaven join the Dragonsguard, an elite force of mages who work with the honored Founder Dragons.[5]

The Oriq are a group of mages who seek to access Strixhaven's magical archives for their own purposes. Because they need so many recruits, they often send agents across Arcavios to find susceptible people to recruit. This causes many of the citizens of the plane to be distrustful of outsiders for fear they may be affiliated with this group.[7]

Most of the known plane is broken across two huge continents—the northern continent of Orrithia, commonly known as the Vastlands, and a mysterious southern continent, called Galathul. The two are linked by a land bridge called the Isthmus of Omens. Strixhaven University is situated in the northeast of Orrithia. 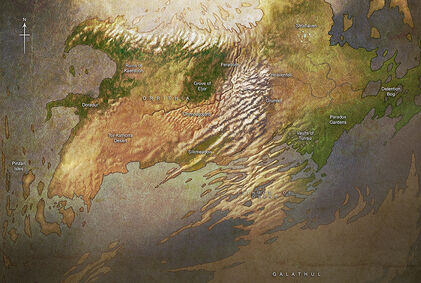 The inhabitants of Arcavios are vastly varied. Below are those directly seen or mentioned on the plane.