Archenemy: Nicol Bolas is the second Magic set designed for the multiplayer Archenemy format.[2] It was released on June 16, 2017 . 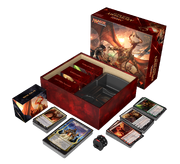 Unlike the first Archenemy release, which offered four villain decks with varying themes, Nicol Bolas contains decks for the opposing team. In addition to the single villain deck for its namesake, it includes three further decks, focused on members of the Gatewatch, tuned specifically for play against that villain deck. It also includes new scheme cards to be paired with the villain deck.

In Archenemy: Nicol Bolas, one player takes on the role of the elder dragon Planeswalker, Nicol Bolas. The opposing team plays as Gideon Jura, Chandra Nalaar, and Nissa Revane. Each character has a 60-card deck, containing a non-premium planeswalker card, and Nicol Bolas has an additional deck of 20 all-new oversized scheme cards. Each deck utilizes colors previously shown to be linked to their respective characters; notably, Nissa uses both blue and green, while the entire Gatewatch team lacks any black.[3][4]

The product also contains 10 double-sided tokens, 4 deck boxes, 1 life tracker, and 1 rules insert. The set is sold in English only.[5] The complete set comes in one box, as opposed to the original Archenemy, which was sold in four different game packs. It was released at an MSRP of US$59.99.[6]

This product is the so-called annex set of Amonkhet.[7] The art of the packaging and within the scenes and themes from Amonkhet, and focuses on the confrontation between the Gatewatch and Bolas in the following set, Hour of Devastation.[8]

When the archenemy attacks any player or planeswalker on the opposing team, any creature a teammate of the defending player controls may be assigned as a blocker by that creature's controller. This replaces the previous blocking rules, which followed normal multiplayer blocking conventions.

Archenemy: Nicol Bolas has four preconstructed decks, one for Nicol Bolas and three for the members of the Gatewatch. The name cards received new art.

The 10 double-faced tokens are: