Ardenvale is the white-aligned court of the Realm on the plane of Eldraine.[1][2] It borders on Vantress. 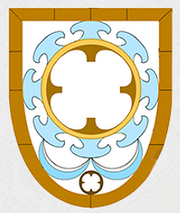 Castle Ardenval is perched on top of a hill overlooking the pastures and fields of the Realm. Within its great white walls are acres of manicured lawns and precise, lush gardens. The court exemplifies the virtue of Loyalty. Merely speaking its name is thought to weave subtle magic of protection around the speaker and their allies. Ardevale is home to a magical ring of eternally burning silver fire known as the Circle of Loyalty, which is located near the top of the castle's central tower and is protected by dozens of loyal guards. An aspirant knight must step into the brilliant white flame, to prove their loyalty. Those who pass through the flame unscathed are deemed worthy and knighted at the center of the ring itself. Those who are burned are quickly pulled out and healed, but rarely are they allowed to attempt the trial a second time.

According to legend, the first human chiefdom had arisen on the spur of stone at the site of Castle Ardenvale. With a crude fortification, the band had defied their elven overlords to lay claim to a scrap of solid ground for themselves. In the castle, magic may only be wielded while training or if the castle is under attack from the Wilds.

Ardenvale is currently ruled by the High King Algenus Kenrith and his Queen, Linden Kenrith. The elite knights of Ardenvale use griffins and unicorns as steeds.[3] The knights are fierce in battle, and all the more so when fighting in a group. They rarely quest alone, and loyalty means that no knight is ever left behind in the clutches of the enemy. When not engaged in battle or questing alone in the wilds, Ardenvale's knights love to gather at the court for company and conversation, treasures they value above all others.