Arena of the Planeswalkers

Arena of the Planeswalkers is a tactical miniatures wargame for 2-­5 players, inspired by the Magic: The Gathering card game, taking place on various planes of the Multiverse. There have been three installments in the franchise, taking place on the planes of Shandalar, Zendikar, and Innistrad.

Arena of the Planeswalkers is co-­developed by Wizards of the Coast and Hasbro. Introduced under the working title Magic the Gathering Strategy Board Game, the definite name was announced in February 2015.[1][2] The game became available at select retailers on July 1, 2015 and more widely available on August 15, 2015 for around $30.[3] The design of the game is by James D'Aloisio, Ethan Fleischer and Craig Van Ness.[4]

Relation to the TCG[edit | edit source]

Magic: The Gathering Strategy Board Game

The game uses many of the same tiles and mechanics as Heroscape, which was designed by Craig Van Ness as well. Heroscape was an expandable turn-based miniature wargaming system originally manufactured by Milton Bradley Company, and later by Wizards of the Coast itself, both subsidiaries of Hasbro. After taking over Heroscape, Wizards of the Coast issued new products with a Dungeons and Dragons theme. The game was discontinued by Hasbro in November 2010.[5] The game is played using pre-painted miniature figures on a board made from interlocking hexagonal tiles that allow for construction of a large variety of three-dimensional playing boards. The game is often noted and lauded by fans for the relatively high production quality of the game materials, in particular the pre-painted miniature figures as well as its interchangeable and variable landscape system.

Each player selects one or more "units," where a unit may be a unique and distinct hero, or an entire squad of generic figures. Hero cards are associated with a single figure (e.g. Liliana) and squad cards are associated with a set of two or more figures (e.g. zombies). A given player may only have one of a unique unit, be it hero or squad, in his army, but there is no limit on how many copies of a common unit may be selected.

Each unit also has signature moves and abilities, often referencing commonly found mechanics in the original Magic: The Gathering. 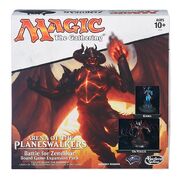 Arena of the Planeswalkers: Battle for Zendikar was released in January 2016 and retailed for $19.99. The expansion unlocks two new planeswalkers - Kiora and Ob Nixilis - and new spells and squads for these characters. Kiora is the first character in the game to draw upon two colors of mana.[6] Kiora is the first multi-color Planeswalker; she can field both green and blue colored creatures and spells. The set also includes the first hero creature, the terrifying Eldrazi Ruiner. The Eldrazi are colorless creatures and can be summoned by a Planeswalker of any color. Furthermore, the set features a 1 player vs. many battlefield scenario in which players fight against the massive Eldrazi Ruiner to save Zendikar.[7][8]

Battle for Zendikar, while not playable by itself, adds great diversity to either of the starter packages. The more pieces there are, the greater the freedom and diversity in choosing planeswalker, army and spell cards.

Arena of the Planeswalkers: Shadows over Innistrad was released on August 1, 2016 and retailed for $29.99. Unlike its predecessor, this set can function as both an expansion to the existing base game or a standalone game. The game introduces new twisted terrain, powerful planeswalkers - Jace, Sorin, Nahiri and Arlinn (both as a human and as a werewolf) - and deadly battlefield scenarios.[9][10]

Shadows over Innistrad, like Battle for Zendikar, includes an assortment of new Planeswalker and Hero figures, as well as new spell cards for players. There are four new Planeswalker cards, three of them multicolored, and so the diversity is far greater than the previous installments in the franchise.

In the box are be: