Arlinn Kord is a tormented werewolf planeswalker from the Kessig province of the plane of Innistrad.[1] She is the protector of the Ulvenwald.

Arlinn is a powerful mage, approximately 45 years old. She wears a single large scratched leather pauldron on her shoulder, which carries over into her wolf form. She has long black hair that is tied into a long ponytail, the tip of which is white.[2]

In her wolf form, she has a charcoal gray coat that gets progressively darker toward the ridge of her back until the fur of the ridge is jet black. Her eyes glow bright orange.[2]

Arlinn Kord is primarily green-aligned, but secondary in red mana. 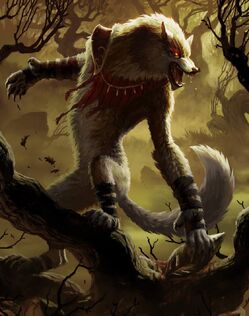 Arlinn was a teenager from Avabruck when the howls of the Mondronen werewolf pack summoned her into the forest and she completed her First Hunt. She always fought against the change and used Avacynian charms, prayers, and fasting to ward it off as much as possible. She even studied magic in the Church of Avacyn, while successfully hiding her curse from her teachers and mentors. The same day that she became an Archmage of Goldnight she and her peers were confronted by a horde of devils at Havengul. While fighting, she couldn't contain the change any longer and she killed devils and several hierarchs alike before her spark ignited and she found herself rampaging through the woods of another plane.

To her horror, she regained her senses in the morning—but not her human form. For better or worse, the experience of retaining her human mind in wolf form gave her a new appreciation for the wild spirit that shared her body. The only way she could return to her human form was to planeswalk back to Innistrad, but now she finds that she can control the transformation, in both directions, with relative ease. And though she is still horrified by the slaughter she wrought in the church, she is embracing the power she wields in wolf form as a natural complement to her magic.

Above all else, Arlinn was desperate to ensure the survival of her kind. She had come to think of herself as part of the pack.[3] And in a world where Avacyn either had cursemuted or killed hundreds of werewolves, and where the angel's church had launched a new inquisition more terrifying than anything they've done before, Arlinn feared that the lycanthropes of Innistrad could meet a very real and permanent end very soon.

After the death of Avacyn she reunited with the mages and cathars of Goldnight to fight evil together.[4]

Later, she was seen helping Thalia and her cathars during the Battle of Thraben against Emrakul's hordes. 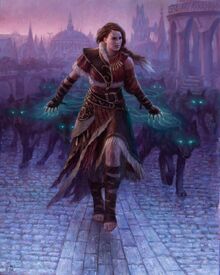 Arlinn, Voice of the Pack

Arlinn was lured to Ravnica by the Interplanar Beacon, and immediately became trapped there due to Bolas's use of the Immortal Sun. Alongside many other planeswalkers and Ravnicans, she fought against the Eternals of Bolas' Dreadhorde.[5]

During the invasion, the trapped planeswalkers (including Arlinn) got together with Ravnican leaders to strategize. She was one of the few planeswalkers who chose to remain on Ravnica after Chandra disabled the Immortal Sun, helping the Gatewatch in their fight against Bolas.