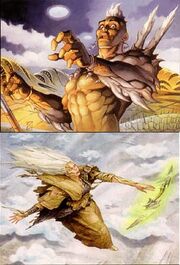 The Auriok are a nomadic human ethnic group who dwell on the Razor Fields of Mirrodin.[1][2][3] Warriors and diplomats in equal turns, the Auriok survive by trading with other races with whom they come in contact, attempting to make peace with other races who can help them survive. They are the steadfast allies of the leonin, but shy away from permanent cities. Auriok came into constant strife with the Moriok, nim, and other creatures from the Mephidross when the swamps began to expand, as well as the artifact armies of Memnarch. They were also in competition with the vedalken for spare parts and artifacts.

Each Auriok tribe is led by a champion responsible for the well-being of their people. Steelshapers are valued in times of war because of their ability to create weapons from the ample metals of their home. The Auriok regard the Cave of Light as sacred ground, and each generation a handful of Auriok girls are brought there to train as wizards. Auriok magic is a strong force on Mirrodin; in order to cope with the dangerous artifact creatures that ravage the Razor Fields, the Auriok have perfected many spells to combat the constructs.

The Auriok are a tall people with bronze skin, stiff white hair, and muscular frames. Like all creatures of Mirrodin, their bodies are composed of flesh and living metal — in their case, gold ("aurum" being Latin for "gold"). Auriok of both sexes wear little, preferring loose white robes, tunics, or loincloths. Auriok cards are exclusively found in white.