Autumn Willow is the ruler and protector of the Great Wood in the Homelands.

A legend in her own time, she is a incarnation of the power of the forest, and the creatures that live among the trees are living extensions of her will. Part of Autumn Willow's strength comes from her unity with nature, for she can only be affected by spells that also affect the land with which she shares her life. Originally a forest spirit, a simple presence, Autumn Willow grew to her current status because of Feroz's Ban, the spell that protected the Homelands from outsiders, since the mana pouring into the Homelands was backed up when Feroz cast his world spell. As a result, Autumn Willow grew incredibly powerful and achieved sentience and physical form.[1]

She ultimately became the guardian and protector of the place that is the embodiment of her will. When the first people settled in the forest, she went forth to meet them and found that they were good people. Autumn Willow gained a motherly affinity for the Folk of An-Havva, and sometimes she walks among them in human guise, to better understand their neighbours. She created for them the Lady's Path. The Folk of An-Havva, on the other hand, believe that Autumn Willow is a creature of Faerie. Tales about one of her creations, the Daughter of Autumn, are common throughout the Homelands. Others tell of encounters with the Willow Priestesses. However, the Autumn Willow, as an avatar of nature, is not necessarily fair or necessarily equal. Her neutrality is well known, but so is her spontaneous wrath for those that displease her or travel in her forest without her permission. A known punishment she inflict on trespassers it is to turn them into lizards.[2]

With the settlement of the humans, came new raids from the goblins of the Koskun Mountains. Autumn Willow created new creatures from nothingness (like the Hungry Mist and the host of Faeries) to watch over the wood. Traders and travelers were allowed to walk through the forest, but any creature who entered into the Wood intent on pillage or war rarely returned. The Spectral Bears that roam the Great Wood are believed to be the personal guardians of Autumn Willow and often escort caravans from the River Bridge to An-Havva. The mere sight of these beasts causes the goblins to flee, for there is a tale of a great Spectral Bear that once consumed an entire goblin village in a single night.

She has worked at keeping the balance between all of the factions within her reach and keeping a careful eye on all the people and lands of the plane. On the evening that Feroz died, Autumn Willow had a prophetic vision of Baron Sengir leading an army through the Dwarven Gate beneath Castle Sengir. When Feroz's Ban started to fail, she felt the energies that sustained her begin to fade. She knows that with her current strength, she may have a chance at restarting the mana channels of the plane, and bring Ulgrotha back to life. However, this would cost the lives of every creature in the Homelands. But if Autumn Willow doesn't use her power, then the strength of the Homelands will fade until even she ceases to exist, and what she saw in the vision may indeed happen. Now Autumn Willow is at a loss for what to do and is trying to find some third option, because to destroy all the ones that she loves brings a cruelty that even a creature derived from balance and nature cannot endure. So she waits for a champion, an event or a miracle that will keep her from using their very primal forces against those that she loves so dearly.[3] 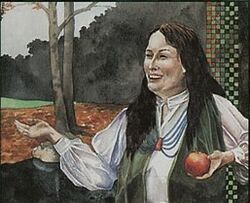 The Daughter of Autumn is an avatar of the Autumn Willow.

The tale of the Daughter of Autumn is a common one throughout the Homelands, and most people seem to dream of her from time to time. These stories speak of a beautiful woman appearing out of thin air and rescuing lost children from danger, as well as the occasional wandering woodsman getting led safely out of the Great Wood by a misty apparition. She has become an important part of the myths and tales of the lands, and represents the power of nature over the land.[1]

The origin of this helpful creature are linked to that of the Autumn Willow, who appears from time to time to help someone in need. Her daughter is merely her avatar, who fights for the innocent and nature. Her very presence is so strong that it will cause people to dream of her and of the Great Wood where she lives.[2] Multiple daughters are known to exist in the same time.[4]