Avacyn Restored is the third set in the Innistrad block. It is the 58th Magic expansion and was released on May 4, 2012.

Unusual for the third set in a block, Avacyn Restored contains 244 cards (101 Common, 60 Uncommon, 53 Rare, 15 Mythic, 15 Basic Lands), and is therefore a large expansion.[2] As usual, the set includes randomly inserted premium versions of all cards in the set.[1][3]

Set in Innistrad, Avacyn Restored continues the storyline arc of the Innistrad block; but, mechanically and thematically, the expansion is a "reboot" of Innistrad block. The focus is shifted away from the graveyard, and flashback or double-faced cards are notably absent. For the Limited format it was considered to be a standalone set.[4]

The 15 basic lands in the set are illustrated by the same artists who worked on the artworks of Innistrad's basic lands. They depict the same, or similar, landscapes but with a brighter tone, reflecting the change from a place of despair and gloom to a place of hope.[5] The expansion symbol for this set is Avacyn's symbol.[6]

Avacyn Restored cards represent the turning of the tide between the struggle of humanity and the monsters of Innistrad.[7] Whereas Dark Ascension featured a greater concentration of monsters, marked by a reduction in the number of humans, Avacyn Restored emphasizes the humans and angels as well as their mortal enemies, demons. Black is defined as the primary color of the monsters and evil; the other colors are now the human colors. White remained the most human-dense and -centered color; but, human tribal effects and humans were made primary and secondary themes in red and blue, respectively.

Avacyn Restored introduced a novel card frame for the Miracle ability, so as to provide a visual cue to facilitate players identifying cards with Miracle more readily, so as to cast such cards in a timely manner.[8] The new card frame features outwardly radiant lines on the card frame, from around the art and name box; furthermore, the name box features an arrow-like outcropping on the top. The set also features two new planeswalkers; Tamiyo, the Moon Sage, a Moonfolk originally from Kamigawa, and Tibalt, the Fiend-Blooded, a human–devil planeswalker (and the first planeswalker with a converted casting cost of 2 mana[9]).

Avacyn, the angelic protector of the plane of Innistrad has been released from her prisoning, the Helvault. The demon Griselbrand, and numerous of his kind, have been released as well. Avacyn Restored plays out Avacyn's campaign to rally her troops to contain the demonic threat and, ultimately, to cleanse Innistrad of all these infernal creatures.[10][11][12][13][14] 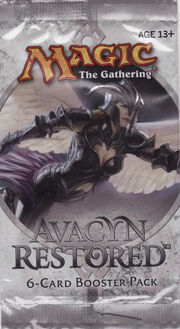 In the prelude to Avacyn Restored, Wizards of the Coast created animated trailers in English and Japanese, and uploaded them onto YouTube.[15]

The prerelease was April 28–29, 2012,[18] the launch party on May 4–6, 2012 and the Magic Online release on May 17–20, 2012. The Game Day was held on May 25–26, 2012. The promotional card given to participants at Prerelease was Moonsilver Spear.[19] The launch promo Restoration Angel, and the Magic Game Day promotional card was a full-art Latch Seeker (top-8 participants received a full-art foil Killing Wave. The Buy-a-Box promo was Silverblade Paladin.

For the Prerelease, stores were able to register for a limited number of Helvault Prerelease Kits along with the standard kits that come with every prerelease. When players at the special Helvault Events got achievements, they could each physically break a seal on their store's own (cardboard) Helvault. Once all the seals were broken, the store would open their Helvault and all the players would share the spoils within.[20][21] Starting with Avacyn Restored, the name of "Launch Party" was phased out.[22]

Regular boosters of Avacyn Restored come with a bonus sixteenth card that is either a "tips & tricks card" or a creature token with an advertisement on the reverse side.

The Avacyn Restored tokens and emblem, in the order in which they are listed, are:[23]

Avacyn Restored introduced the Miracle mechanic, a keyword ability featured on cards that, if and when drawn as the first card drawn that turn, may be cast for the reduced Miracle cost.[24] In addition to this, Soulbond was introduced.[25][26] This ability allows a player to "pair [up]" with a creature with Soulbond with another creature, with or without Soulbond, to confer benefits to both creatures as long as they remained paired. Both Miracle and Soulbond are featured across all colors except black.

In order to compensate for the lack of new mechanics, the Undying keyword ability was carried over from the preceding expansion, Dark Ascension, and featured primarily on black cards. The set also featured "loners" (creatures or other permanents that improve if their controllers control only one creature, which represented the thematic opposite of Soulbond) and a sacrifice subtheme.[27]

Another subtheme was "flickering". "Flickering", alluding to the effect of its namesake, the Urza's Destiny card Flicker, involves temporarily exiling a creature for a duration before returning it to the battlefield. "Flickering" was noted to interact with creatures with enters-the-battlefield and/or leaves-the-battlefield abilities, including those with Soulbond.[28]

Avacyn Restored features three four-card cycles, with no black card, as a reflection of the absence of white cards in the cycles of Dark Ascension.[29] It also features one vertical cycle and a part of a mega cycle.