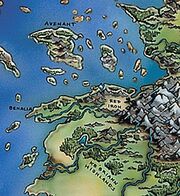 Avenant is an island in the the Domains of Dominaria.

It is the birthplace of Order of the D'Avenant, and is best known for the popular Avanaise poetry written by its Bardic Circle.[1] Avenant is a Matriarchy led by a suzeraine. Avenant's archers are also trained as poets, so that each arrow is guided by a fragment of verse.

Avenant is located north of the main land Benalia.,[2] and is bordered by the Sea of Avenant. It is almost impossible to approach as it is fiercely protected by an army of archers and ballistae.

It once formed a part of Benalia, but was lost after an insult by an unwise clanleader of Clan Joryev. Others say it was a leader of Clan Ternsev, who fell in love with an Avenant prince's daughter. She did not take well to her kidnapping, and neither did her father.

In the Mending Era, Avenant has rejoined Benalia, replacing Clan Ternsev as the seventh Great House.[3] House Avenant's symbol is a pattern of seven crossed arrows. The head of the house, Cerise D'Avenant, attends the Council of Seven personally, while her sisters oversee daily affairs on the island.