Azor is a sphinx of unknown origin and a former planeswalker. He is a lawmage and a hieromancer.

On Ravnica, he is remembered as Supreme Judge Azor I and the parun of the Azorius Senate. On Ixalan, he is known as the legendary Last Guardian of the Immortal Sun.

Azor visited many planes in the multiverse. Numerous ancient civilizations have legends of a semi-divine winged "lawbringer" figure, which can be traced back to Azor.[1] Although his plane of origin is forgotten, sphinxes on many planes, from Alara to Zendikar, show signs of his possible influence on their demeanor and culture.

One of his client worlds was conquered by Nicol Bolas, which caused him and his fellow planeswalker and ally Ugin to search for a way to defeat the elder dragon. They met on an unknown plane at a place referred to as the Palace of Justice. Together, they devised a plan to get rid of Bolas for good.[2]

Azor was the author of most of the written part of the original Guildpact. He was present during the Clash of Two Champions, where he proposed the legal covering of the inter-guild pact for the first time. He also created the Implicit Maze. 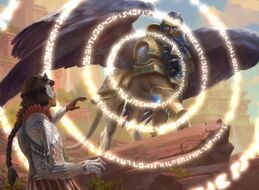 As part of the plan to trap Bolas, Azor traveled to Ixalan and sacrificed his planeswalker's spark to create the Immortal Sun, a powerful artifact that in addition to other effects prevented Planeswalkers from leaving the Plane.[1] By this act, he also trapped himself on the plane. He first brought the artifact to Torrezon and later to Orazca.[3] As the Last Guardian, he was revered by the River Heralds, who he considered to be the wisest beings on the plane.[4][5]

When Jace and Vraska reached him in his sanctum within Orazca, Azor prided himself on having given countless worlds perfect order. Vraska's protests that the guilds had turned out malevolent were brushed off as failures of its citizens. It was revealed that he had created the Immortal Sun to imprison Nicol Bolas, but that he had never received Ugin's signal to activate the sun and draw the evil dragon to the plane. As a result, he wanted to use the Immortal Sun to establish another perfect system of government, but one after another Azor rejected the various civilizations as worthy to reign. Vraska tried to kill him for disrupting the balance of countless planes, but Jace stopped her. Speaking as the Living Guildpact, he sentenced Azor to spend his life in solitude on Useless Island.[6]