Battlebond is the first-ever Two-Headed Giant-focused Magic booster set. It was released on June 8, 2018. Battlebond was the Innovation Product for 2018, and was designed to be drafted.[3][4][5][6]

Battlebond is inspired by sports and e-sports.[3] The set contains 254 unique cards (5 Basic Lands, 101 Commons, 80 Uncommons, 53 Rares, 15 Mythic Rares); 85 of those cards are new and will all immediately be legal in Commander, Legacy, and Vintage. Returning favorites from throughout Magic 's history (many with new art) round out the set and cultivate an environment of two-on-two combat and sport. The Battlebond set is designed to be drafted with players who will make groups of two players for Two-Headed Giant multiplayer games.[3] The expansion symbol depicts two connected figures in front of a diamond shape, and is a silhouette of the Spire Garden towers. Battlebond is printed worldwide on Japanese multi-ply card stock.[7]

To facilitate the draft environment, R&D skimped on the weaker power level cards normally found at common and also increased the number of common artifacts above the normal rate.[8] Apart from draft, Battlebond can also be played Sealed. Most of the unique mechanics — the main selling point of the play experience — are indifferent to the format, so long as it's Two-Headed Giant.[4] Partnered pairs will always show up together in booster packs. If you open a foil partner, the other partner will also be foil.[9] Some cards appearing in the set were designed with Commander, Cube, and other formats in mind.[10]

Collector numbers for this set starts with the partners in rarity order, followed by the other new cards in WUBRG, and finishing with the reprints in WUBRG.

There are twenty-two promos (the eleven partnered pairs); both planeswalkers with alternate art (numbered #255/254 and #256/254) and all with foil treatment. They come in two-card packs.[4]

Welcome to Battlebond, where competitors battle in pairs. Recruit a trusted partner and fight shoulder-to-shoulder, hand-in-hand, or back-to-back for glory and the roar of the crowd! Forge an unbreakable bond with your combat companion and claim your place in the pantheon of champions! All new cards in Battlebond depict the environment of Valor's Reach, an area on the plane of Kylem, where combat is fought two-on-two.[3] And like any good spectator sport, the goal isn't just to win, but to look good doing it. Style points count.[4] 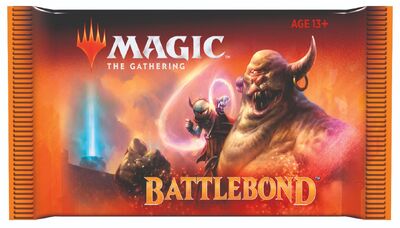 Battlebond is sold in 16-card boosters (one card being a marketing card). Like other draft related sets, it features horizontal art on the booster packs. They have artwork depicting key characters Will and Rowan Kenrith, Zndrsplt and Okaun, and art from the card Lore Weaver. The set is also sold in Booster Battle Packs containing six boosters.

Battlebond has "twos" all throughout the art, flavor text, and world of Kylem.[2]

The new mechanics in Battlebond elevate the promise of Two-Headed Giant to its full potential.[13]

The set also introduces a new term: "your team". Any card that refers to "your team" refers to you or a teammate.[13] If you're not playing a team game, "your team" just means "you."

Battlebond introduces the Azra creature type, and the Will and Rowan planeswalker types.

The set has a significant Warrior-tribal theme.[2] The Warrior archetype is centered in black and red with a good amount in white. Blue and green have some Warrior rewards at uncommon, as well as some common Warriors. While reprints still have their old artwork, all the new Warriors in Battlebond have glowing weapons as a visual cue.

Battlebond has seven cycles, one of which is a double cycle: