Belbe (pronounced 'bell, bee') was a Phyrexian who lived on Rath. She was the protagonist of the Nemesis novel.[1]

Belbe was a cyborg, made from a fusion of Phyrexian technology and the body of the elven princess Avila. She had pale skin with bluish splotches and black attire. Her purpose for existing was to choose the new Evincar of Rath or become one, after the presumed death of Volrath in Mercadia.[2] She was given her name and function by Abcal-dro, a member of Yawgmoth's Inner Circle.

Avila was an elf from the Skyshroud forest in the artificial plane of Rath. She was an elven princess and the daughter of Eladamri. Her former lover was captured by Phyrexian forces and transformed into one of their agents. He had only one mission - to kill Avila and bring her body to Phyrexia at any cost. Having elven agility and skills supported by Phyrexian technology, he succeeded. He poisoned Avila despite his love for her, still fresh in his mind. The strong poison killed her faster than a heartbeat. He then managed to deliver her body through a portal to Phyrexia, despite being pursued and captured by the elves.

In the Fourth Sphere of Phyrexia, Avila's body was completely dissected and precisely scanned. Under the eye of Abcal-dro her body was reconstructed. Although her skeleton was forged in duralumin and steel, and her body strengthened beyond imagination, she still looked almost like her former self and her organism was still sensitive to Phyrexia's toxic atmosphere. Her mind was pure, however, and though it was filled with all of Phyrexia's knowledge, she had no memory of her former life and did not even know her name. Abcal-dro delivered it to her: it was Belbe - derived from Thran word be'el-be, which means a lens. A black sphere was then implanted in her body - the Eye of Yawgmoth. Her name was a literal description of her function, as she was to serve as Yawgmoth's eyepiece so he could observe the selection of the next Evincar. 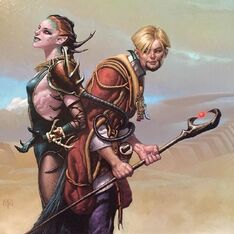 Belbe enjoyed enhanced speed and strength from her oily blood and mechanical augmentations. She was also intensely curious about her new world. Initially, Belbe spoke with a robotlike tone and was very procedural in her duties. After restoring order and command to the Stronghold, she settled on three possible new evincars: Crovax, who could control flowstone; Greven il-Vec, who commanded the Phyrexian armies and the skyship Predator; and the captive Ertai, who was abandoned during Weatherlight's exodus. Ertai made the best impression on her with his bold behavior even as a captive and maturing ability to control flowstone.

Belbe began to exhibit more elf-like traits as she grew more accustomed to her world. As a result, she became increasingly disillusioned with the Phyrexian cause. She disabled the Eye of Yawgmoth implanted in her so he could not spy on her. She developed a romantic relationship with Ertai and allowed him to train his mostly latent ability to manipulate flowstone in the hope that he would become evincar. Because of her love for Ertai, she also set in motion a plan to decrease flowstone production at the Stronghold and therefore prevent the Rathi Overlay.

Meanwhile, Crovax's soul harvesting and feasting made him increasingly hostile toward Belbe. Crovax attacked her, but Belbe was able to defend herself despite Crovax's strength and control of flowstone in the environment. As a result, Crovax decided to no longer antagonize Belbe's decision nor take control by force, as she had to make her decision soon.

Eladamri, on a mission to destroy Predator, was captured and brought before Belbe. Upon seeing his daughter's corpse reanimated as Belbe, Eladamri lashed out at her in rage. Belbe was confused by the attack and did not retaliate; she just had him imprisoned and interrogated as standard procedure. However, she was very perplexed by Eladamri's behavior - why would a captive in chains surrounded by enemies attack her when it would only mean certain death?

Crovax's strength grew to frightening power, so Belbe used politics to keep herself safe before making her decision. Frustrated, Crovax organized a coup d'état to force her to declare him evincar. In a final showdown, Belbe, Ertai, and even the returning Volrath confronted Crovax before Belbe was eventually forced to declare Crovax the new evincar. Afterward, she accompanied Crovax to the Dream Halls, where Eladamri and a small band of rebels had been trapped but could not be extracted. She convinced Crovax to let her parley with the rebels, but in fact, she wanted a chance to speak with Eladamri. After discovering her origins, she reprogrammed her return portal to Phyrexia to allow Eladamri to escape to Dominaria along with Takara en-Dal and Lin Sivvi. However, the still-bitter Eladamri threw the last drop of the poison left by Avila's assassin on Belbe. It was too potent even for Belbe's Phyrexian enhancements and she died instantly.

Belbe received a large, honorable funeral organized by Crovax to coincide with Volrath's execution. Afterward, a twisted, four-armed Ertai reached into the smoldering pyre and secreted away Belbe's skull, a memento of his former love.