Beta is actually a nickname, but widely accepted as the name for this print run.[2]

Among Alpha, Beta, and Unlimited, cards from Beta were considered early on to be the most valuable because of the black border and the use of the 4mm rounded corner (Alpha cards were originally shunned as marked cards in early tournament decks, which had to appear unmarked without sleeves under early tournament rules).

Due to the printing process, it is possible to get land cards in a rare (Islands, 4 are on the rare print sheet), uncommon, or common card slot. The chance is approximately 3.31% for rares, 21.5% for uncommons, and 38.02% for commons. This is because they put lands on all three printed sheets.

Beta was released on October 4, 1993. Limited Edition was advertised as having “more than 300 cards,” so a third version of each basic land was added in the Beta release in order to validate this claim. The print run was announced by Wizards to be 7.8 million cards. Cards were available from mid-October 1993 until mid-December 1993.[7] The cards were evenly divided over 60-card starter decks and 15-card boosters. UPC codes were now printed on the bottom of each starter deck (Alpha had none).

The 40-page Beta rulebook had Bog Wraith on the cover and “Worzel's Story” was dropped to include a summary of play, an FAQ and an Index.[8]

An International Edition card is distinguished by its square corners and its gold card border as seen on the backside of a card.

The Collectors' Edition was a special commemorative edition of Beta cards released on December 10, 1993.[9] Wizards of the Coast produced 13,500 copies of this set.[10] These cards have square corners and a gold border on the back and, thus, are not legal in DCI-sanctioned tournaments. 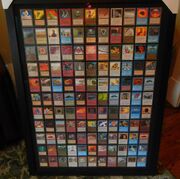 The following cards from Beta were not printed in Alpha:

Beta therefore adds the following cycles to those present in Alpha: