Black Lotus is the single most valuable normally printed card in the game of Magic printed in a standard set. Due to its fast mana acceleration, it is also a member of the Power Nine, nine notoriously powerful cards from the original Magic print runs.

Printed as one of the Power Nine only in Alpha, Beta and Unlimited, this artifact can provide a free mana boost for any deck. It is restricted in Vintage and banned in Legacy. Christopher Rush drew its original artwork. 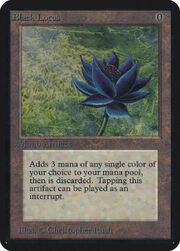 The Alpha version of the Black Lotus is usually considered to be the most valuable non-promotional Magic card ever printed, aside from misprinted cards.[3]

Originally, Magic did not limit the number of copies of a card you could play in a deck; this allowed first-turn wins with decks comprised of twenty Black Lotus, twenty Channel, and twenty Fireball. The four-of maximum was quickly added to the rules to avoid this, and Black Lotus and Channel were later restricted or banned in their environments to make this even less likely.

Black lotuses have appeared in numerous Magic storyline arcs. A black lotus, House Carthalion's most powerful relic, was discovered by a young Adam Carthalion and was kept in House Scarlet in Arathoxia. Jared Carthalion stole it after the Mistress of House Scarlet let him in and showed it to him, and later used it to summon a Shivan Dragon to kill Ravidel at Castle Melmereth.

Black lotuses were reportedly grown on Tolaria, in the Lotus Vale, though this is difficult to substantiate as later information makes no mention of them.

The wizard Towser found few black lotuses in the area of Whispering Woods.

As one of the most famous cards of all time, the Black Lotus has inspired numerous, more balanced, cards with abilities that reference it in some way.[5][6]