A booster pack is a sealed package of random Magic cards from a particular expansion set, designed to add to a player's collection.

Starting with Throne of Eldraine, regular boosters were rebranded as Draft Boosters, which formed a line up with Theme Boosters and Collector Boosters.[1] A later addition were the Set Boosters.

Draft Booster is the modern name for the original booster product. They have a fixed distribution based on rarity. A regular booster pack nowadays contains sixteen cards: fifteen playing cards and a marketing card / token.[2][3]

Of the fifteen playing cards, one is a basic land, ten are common, three are uncommon, and one is rare or mythic rare.

There is a also a chance for one of the common cards to be replaced by a premium foil card of any rarity. This results in a booster pack with one basic land, one foil card, nine common cards, three uncommon cards and one rare or mythic rare card.

While most modern sets follow this breakdown in draft boosters, some sets may have unique pack requirements (like Innistrad including double-faced cards in every pack) that can skew the typical distribution of rarities and card types. In addition this breakdown has evolved over time, with older sets sometimes having different numbers of cards in their boosters.

Starting in 2018, Wizards of the Coast began to create special boosters targeted at special audiences.

Theme Boosters contain 35 cards (a variable amount of commons and uncommons, and 1 rare or mythic rare) from a given color or theme. The MSRP is $6.99. These are targeted at deckbuilding players, providing a greater number of cards that could go straight into their deck. They also play up a set's flavor for those that might be interested in sampling a slice of a particular aspect of the world.

Collector Boosters are targeted at collectors and sold for $12.99. Unlike Draft Boosters, which optimize the Draft experience with a lot of repetition and a huge number of commons, Collector Boosters are maximized for more diversity in content, with more rares, foils, extended art, borderless planeswalkers and showcase cards.[1]

Set Boosters were introduced for Zendikar Rising. They are targeted to players that are not interested in Draft or Limited, and sell for a slightly higher price than Draft Boosters. Each pack comes with fourteen objects, twelve of which are Magic cards with a higher variety in rarities and unique treatments. 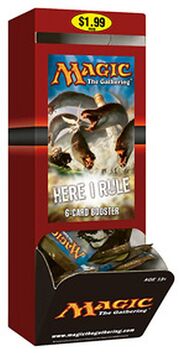 Conflux was the first set to be sold in six-card booster packs containing a tips/token card, one land, three commons, one uncommon, and one slot that had an equal chance of being rare/mythic, uncommon, or common. These packs were exclusively available from Gravity Feeds.[4] These could be found at mass-market retailers like Target and Walmart. 6-card boosters were available up until Magic 2014. They were available in Japanese from 2010 Core Set to New Phyrexia. Spanish six card packs of Magic 2011 and Magic 2012 were added to the Salvate Magazines.

A seeded booster is a special set of cards that are made available at some prereleases.[5] It consists of playable cards that help to create a coherent deck, so that way more people (especially newer players) have a good time. There are limited combinations of cards that can appear in a seeded booster,

Special promotional prize boosters introduced in 2016 for the Standard Showdown, containing three cards each. One is a premium card from a currently legal Standard set, including Masterpiece Series, and two are non-premium cards that are either a rare or a mythic rare from a set currently legal in Standard.[6]

The draft boosters of Commander Legends contain 20 Magic cards (and a marketing card).

The first booster packs had a fairly simple plastic packaging, where the sets only were differentiated by the color. Core sets were brown, Arabian Nights was purple, Antiquities was silver-grey, and so on. A problem was that this early packaging was slightly transparent.

Nowadays, booster packs are sealed with silver foil wrapping to keep all of the cards neatly in place. Fourth Edition was the first core set, and Ice Age the first expansion, with packs made of foil flow wrap and the first with artwork on the wrappers.

The foil, a mixture of metal and plastic, is sealed off with heat, a process called "crimping". In the process of sealing boosters closed, cards can get caught in the heat press and accidentally get crimped, as well.

With Modern Masters 2015 WotC experimented with recyclable paperboard booster wrappers.[9] Soon rumors abounded about the ease with which these new cardboard packs could be repacked.[10] Also, the cards had room to move and could be damaged during transport. Mark Rosewater later admitted that some challenges had to be solved, before the experiment would be repeated.[11]

In August 2019, Hasbro announced that it would begin phasing out plastic from new product packaging starting in 2020.[12] This will include shrink wrap, window sheets, and more.[13] Virtually all plastic packaging will be eliminated by the end of 2022.

The packaging features several markings and symbols.[14] The CE Mark, together with the name and address of the first supplier, is required by law to appear on all toys placed on the market in the European Union on and after January 1990. The Lion Mark was developed in 1988 by the British Toy & Hobby Association as a symbol of toy safety and quality for the consumer. The Green Dot is an internationally recognized symbol that shows a company’s commitment to environmental protection.

Collector boosters are packaged 12 to a box.

Starting with Magic 2013, the blister packs were replaced with cardboard booster sleeves.[15] and about printing and collation issues.[16] The sleeve is a cardboard overwrap around a regular booster in a normal foil wrapper. It's just a bigger package to make those items just a little harder to steal from big-box retailers. A Booster Sleeve display may contain 12 or 48 packs.

Wizards of the Coast toyed with the idea of scratch-off cards in boosters of Unglued 2. Another idea they explored was having it come with pieces of bubble gum. But it turned out that putting something edible in the booster packs created a whole series of stricter rules, and it turned out to not be feasible.[19]

The term "booster pack" is also referenced in the rules.

Booster Pack
A group of unopened Magic cards from a particular expansion. Booster packs are used in Limited formats. See rule 100.2b.

"Booster Fun" is the collective name that R&D use for the types of card frames that may appear in Collector Boosters.

Mystery Booster is a Magic booster set, designed for Chaos Draft. It was released in 2019.

Welcome Boosters were introduced for Core Set 2021. These are free gifts for beginning players. Each Welcome Booster for a particular set is exactly the same and contains a sample of legendaries, planeswalkers, showcase cards, and more.