Brago a.k.a. The King Eternal was a spirit that ruled the High City of Paliano on the plane of Fiora.[1]

Born third son to a minor house, the ambitious young Count Brago worked himself upwards in the ruling class of Fiora. He was a terror in the courts and council chambers, his arguments flawless, his entreatments irresistible. He built up a coalition of nobility, clergy, and the merchant class. He rooted out corruption and replaced it with humility. But always, always, more power ended up in his hands.

However, only three years after he had ascended to the throne, he was diagnosed with a hereditary and incurable disease. The priesthood — or Custodi — started giving treatments to prolong his life but extended themselves too far. His body would deteriorate, but he wouldn't die. Thinking it an act of mercy, Brago's good friend Selvala ended his suffering with a dagger through his heart. However, this only released his spirit. The Custodi knew that they would lose power through the succession. So they kept Brago’s spirit alive as a figurehead and were able to retain their command. 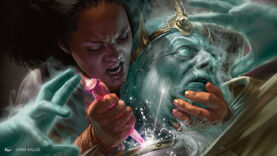 Instigated by Marchesa, Brago's spirit was later eliminated as well. It was killed by the planeswalker Kaya.[2][3]