Bruna, Gisela, Sigarda, and Liesa are described as sisters who pre-existed Avacyn.[1]

The Flight of Alabaster[edit | edit source]

Bruna and the other angels of The Flight of Alabaster personify the Blessed Sleep and are associated with the Hunter's Moon season.[2][3] They provide magic that wards against the desecration of dead humans. In the absence of Avacyn, they remained the most active guardian force and continued on to reinforce wards that protected the human populations. 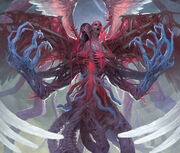 After Avacyn's corruption, Bruna fell in complete alignment with Avacyn's will, going off on a crusade to wipe out humanity. She and Gisela showed up at Sigarda's home, trying to intimidate her into allying herself with them.[1]

After Avacyn's death, Nahiri managed to summon Emrakul into Innistrad. This resulted in Bruna and Gisela being mutated into a horrific amalgamation Brisela that enforced Emrakul's will.[4] Brisela was killed by Sigarda.[5]