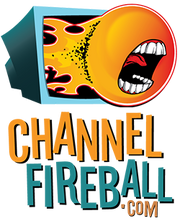 ChannelFireball is an online retailer for Magic cards and related gaming utensils based out of Santa Clara, California, United States.

It is popular for its text article and web video content produced by its associated Pro Players such as Luis Scott-Vargas, Owen Turtenwald, Conley Woods, Paulo Vitor Damo da Rosa, David Ochoa and others. As these players usually test together for large tournaments and often bring similar strategies to those tournaments, they are known as a Super-team because of the large number of members (as opposed to traditional teams who enter team events that only consist of three players, or three to four players comprising the national team at the World Magic Cup). ChannelFireball has also been hosting high-level events throughout the world, most visibly Grand Prix events, which, starting in 2018, they are the sole hosts of.[1]

The name of the website and team is derived from the cards Channel and Fireball, one of the original combos in Magic, and is also related to its video content.

ChannelFireball has also since January 2015 been associated with Limited Resources, a popular podcast about Limited Magic hosted by Marshall Sutcliffe.

ChannelFireball has been sponsoring a number of professional players throughout its history. Initially, these were all members of team ChannelFireball (or team Fireball, which it was known as in the beginning) and featured among others Luis Scott-Vargas, Josh Utter-Leyton, David Ochoa, and Gerry Thompson. In 2014, ChannelFireball also became the sponsor of a second team, The Pantheon, with prominent players such as Jon Finkel, Kai Budde, Gabriel Nassif, and William Jensen, but with the advent of the Magic Pro Tour Team Series, this team was picked up by D3 Go!. In the 2016–17 season, ChannelFireball was associated with the following teams:

In 2017–18, ChannelFireball fielded a single team:

Starting in 2018, ChannelFireball Events (CFBE) is Wizards of the Coast's exclusive global partner to run all Grand Prix.[1]