Difference between revisions of "Check land" 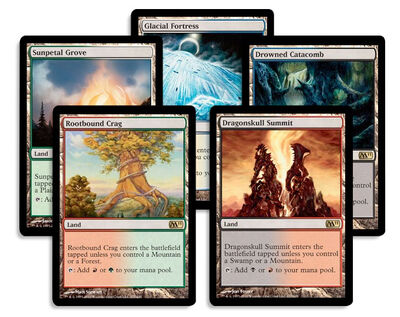 The cycle of allied color check lands from Magic 2011.

Their name stems from the fact that they check if the player controls a land with a basic land type that corresponds with either color the land can produce. If this condition is not met, they enter the battlefield tapped.

Allied color check lands were introduced summer 2009 in Magic 2010. They have since been reprinted four times, namely in each of the three subsequent Core Sets up to Magic 2013 and in Ixalan.

Enemy color check lands were introduced fall 2011 in Innistrad. So far, they have not been reprinted — with the exception of Isolated Chapel, which was included as playset in the Modern Event Deck.