Chronicles was the twelfth Magic: The Gathering set, released in July 1995, and the first compilation set. It was not considered an official expansion, but an extension of the Fourth Edition core set. Until the release of Modern Masters it was notable for being the only tournament-legal non-core set that introduced no new cards. 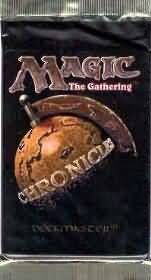 The nature of the extension[edit | edit source]

Because Chronicles was considered to be an extension of the basic set, and not a limited expansion, it would not count as one of the two latest expansions for purpose of Type II tournament competition. Players would be able to use Chronicles in the same way they used cards from the basic set. Wizards of the Coast planned to keep Chronicles in print as long as demand warranted it. They planned to change the card mix just as they did with the basic set. The purpose of Chronicles was to keep two steady sources Magic available at the same time, to increase the pool of cards available, and to make it easier for new players to get a hold of useful, popular cards for their decks. However, this plan was aborted by the time of the release of Fifth Edition, where extra cards simply were incorporated in the basic set.

Chronicles was printed so that new players, and other players who were unable to buy the sets originally due to their quick sellouts, would be able to have their own cards from those sets. Chronicles was sold in booster packs of twelve cards (nine from the commons print sheet and three from the uncommons print sheet). It was released in early August 1995 and went out of print in December 1996. It is estimated that about 180 million Chronicles cards were produced. The set was printed in English and Japanese only. The Japanese version was black-bordered, because as it was the first time those cards were printed in the language. A similar black-bordered set called Renaissance was released into German, French, and Italian markets. These contained a different array of cards.

The thought of doing a “Best of 1994” had been floating around the hall of Wizards of the Coast for a while.[2] Many cards from past expansion sets were difficult to find or had become too expensive for many players to afford. Early Magic sets had small print runs and had been carried by only a select few stores. This kind of hit-and-miss availability unbalanced the play of the game, as players with hard-to-get cards had an advantage over those whose local shops didn’t carry Magic cards back when those cards were released.

The Chronicles team decided to skew the set’s card mix heavily in favour of Legends, the largest set prior to Ice Age. Legends diverse and powerful cards made it a very popular set, and as a result, those cards were very hard to find. Because of this, well over half the cards in Chronicles came from Legends. In general, cards were chosen because they were well-designed, useful in play, and helpful to the balance of the game as a whole. The set collaborators were careful not to put the extra-powerful cards (like the Arabian Nights Juzám Djinn) into the set, so that those cards' market values would not be affected. Nonetheless, many popular cards, such as Legends' Elder Dragons, were included.

Three decisions kept the company busy for quite a while. One was the name: what should the set be called? ‘’Best of 1994’’ wasn't a great title, nor was it completely accurate. Names considered and discarded included Mosaic, Tapestry, and Archives. Many others were suggested, though not always seriously (Urza's Private Reserves).

The second decision was what color the borders should be. It was already decided that each would retain its original expansion symbol from its set, but should the cards be black-bordered or white-bordered? This topic was discussed at great length, and there were passionate advocates for both options. In the end, WotC chose to give the cards white borders since the set would not be a limited edition. White borders would also help distinguish the cards from the originals, and would help preserve the value of the original cards for collectors.

Some cards in the set would prove to become powerful as more players experimented with them. Arabian Nights Erhnam Djinn proved to be exceptionally useful in concert with the Fourth Edition's Armageddon, and a powerful deck (named Erhnamgeddon) arose from this combination. Although the more valuable cards were excluded, card collectors were unhappy with the glut of cheap copies of the Elder Dragons and the like.[3] This and the opinion that there were too many cards in the card pool triggered a statement from Bill Rose, Vice President of R&D:

Much later, that decision was reversed with the printing of the Modern Masters series.