Coldsnap is the thirty-ninth Magic expansion and was released in July 2006 as the third set and second small expansion of the Ice Age block, replacing the Homelands expansion as a member of the block.[2] The prerelease events for this set were held on July 8–9, 2006.[3][4]

Coldsnap contains 155 black-bordered cards (40 rare, 55 uncommon, and 60 commons). Its expansion symbol is a depiction of three icicles.[5] When Coldsnap was initially announced, Wizards of the Coast claimed that the set was a "lost design file" only recently found.[6][7] Because this statement was taken seriously, Mark Rosewater later had to clarify that it was a joke.[8][9]

Coldsnap had the shortest-ever design, at six weeks.[10] R&D made a conscious effort to hit on every standout theme in Ice Age and Alliances to give the set the necessary “retro” feel.[11] This included cumulative upkeep, allied colors, pitch cards, old characters springing to life and land that doesn't tap for mana.[12] The 'snow-covered' supertype changed to 'snow' and expanded its use to nonland permanents.[13][14] The new Recover mechanic captured the feel of "graveyard order matters" without requiring meticulous tracking.[15] Another new mechanic was Ripple.[16]

Because most sealed tournaments would use only Coldsnap cards due to the rarity of Ice Age and Alliances booster packs, as a means of making frequently recurring commons more valuable, several common cards (the "kindle" and "surging" cycles) were printed that rewarded players for using multiple copies in their decks, making them more desirable.[17]

Terisiare, the island continent that was home to the Brothers’ War and the Ice Age, is in a state of rebirth known as the Thaw.[18][19] The icy shell that encased the continent is melting away. Most of the inhabitants of Terisiare rejoice as the ice gives way to warmth and the rebirth of the land. But, in this time of great change, there are some who see it as a time to angle for power: a secretive society of mages poised to shroud the continent with their icy brand of magic. 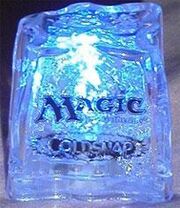 Promotional Coldsnap LED icecube given for demo'ing Magic at the 2006 Comic-Con in San Diego. 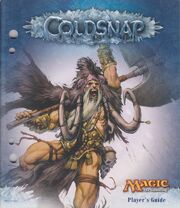 Coldsnap is the only expansion released that does not fit the Modern block schedule, creating some confusion. It was legal in the Extended format based on its release date, not on its association with the Ice Age block.

The following creature types are introduced in this expansion: Juggernaut.

Coldsnap has ten cycles and a vertical cycle.

Coldsnap has one mirrored pair.

Like other theme decks, Coldsnap theme decks used cards available in its block. This created reprints of Ice Age and Alliances cards. These reprints were different from the originals in that they had expansion symbol rarity coloring (in addition to being slightly redesigned), have collector numbers, and were printed featuring the new card frame.[25]

The following cards have been reprinted from previous sets and included in Coldsnap.