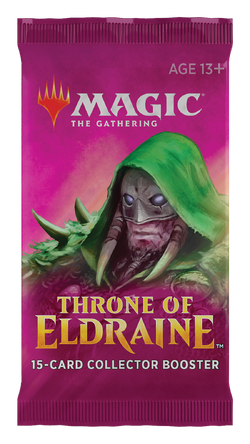 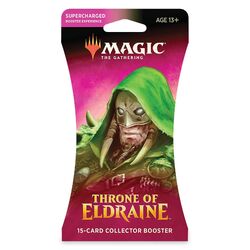 Magic Collector Boosters are booster packs targeted at collectors. Unlike Draft Boosters, which optimize the Draft experience with a lot of repetition and a huge number of commons, Collector Boosters are maximized for more diversity in content, with more rares, foils, extended art, borderless planeswalkers and showcase cards.[1]

For Ravnica Allegiance, Wizards introduced the first Collector Boosters. They contain fifteen cards for $12.99:[2] These featured:

This was a very limited experimental test run. Collector Boosters were only available in Japan and North America, and even there they were not widely available.

Collector Boosters became a regular feature with the release of Throne of Eldraine.[1] This version contained:

"Booster Fun" is the collective name that R&D use for the types of card frames that may appear in Collector Boosters: extended art, borderless planeswalkers and showcase cards.[1][3] Booster Fun cards evolved from Masterpieces. The difference is that the Booster Fun cards are versions of cards in the set, not from outside of the set.[4]