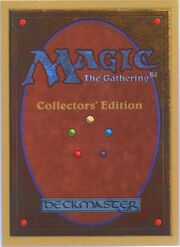 The backs of all CE cards featured a distinctive gold border.

Each set was sold in a collector's box with 363 cards. This included one of each of the 302 cards from the Limited Edition Beta printing plus an additional 61 basic land cards. The cards were separated into 6 plastic-wrapped groups. The sorting and order of the cards related to the printing sheets and sorting process used, which explains the rare Islands.

The faces are identical to the Beta printing but have square corners. The reverse side has gold borders around the edges and gold printing saying either "Collectors' Edition" or "International Edition".

The bottom of the box has this message:

"This special collectors' edition of Magic: The Gathering contains all 302 cards from the original Deckmaster series of playable trading cards. The complete set is augmented with duplicates of the many land cards, making a total of 363 cards. These cards are produced in a special collectors' format with square-cut corners and gold borders. So pick up the Magic: The Gathering Collectors' Edition and explore the whole world in one box."

The original announcement for the sets said that there were to be 10000 sets of the CE sets printed but, quoted in this newsgroup posting, Peter Adkison stated:

"Originally we were only going to do 10,000 factory sets, and we announced it that way. But then sales started coming in for WAY more than that. And then it started to take off in Europe. So, we decided to print another 5,000 for distribution primarily overseas, and call those the International Editions. Originally we intended to sell the Collectors Edition ones only in the US and Canada, and the International Editions only overseas.

But then the printer shorted us nearly 10% of the print run, i.e., nearly 1,000 less than what we ordered, on the Collectors Edition cards. And, as I said, we had orders for way more than 10,000, to begin with, so the distributors (and consequently the retailers, and consequently y'all) were already pissed off (or would have been) at being pro-rated. Rather than pro-rate them again, we substituted in some of the International Editions."

Over time, a vast majority of the sets have been opened for various reasons, such as for play, storage in card binders, or individual sale. Some of the cards, especially the ones representing the Power 9, were made into counterfeits, usually by rounding the corners and either "re-backing" them or carefully scraping the gold layer off.

Here follows a list of the contents of the set, arranged according to the order packaged within the sealed groups.