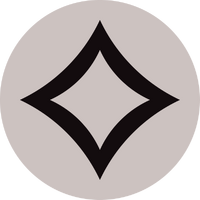 In Magic: The Gathering, colorless has two in-game meanings. It is either a type of objects, or a type of mana. Note that colorless is not a color, and is not represented in the color wheel.[1]

An object (a card or spell) with no colored mana symbols in their mana costs is colorless. Most artifacts are colorless, as are some creatures like the Eldrazi and some non-permanents like Ghostfire. Karn and Ugin are colorless planeswalkers. Colorless gets access to pretty much everything, but at inefficient mana costs. For example, the destruction of permanents costs a minimum of

Devoid is a characteristic-defining keyword ability which states that a card is colorless, regardless of the colors in that card's mana cost.

The idea of colorless mana was already introduced in Alpha with Basalt Monolith, Mana Vault and Sol Ring.[4] It set the premise that most mana comes in one of the five colors (white, blue, black, red, or green), but there is a sixth subset of mana that is not any color. This mana could only be used to pay for costs that don't require color (for example artifacts).

In early sets, the text for Sol Ring was still spelled out as "Add 2 colorless mana to your mana pool". However, from Onslaught onwards, this was officially changed for editing reasons to "Add

The cost of many cards includes generic mana (e.g.,

R&D came to the conclusion that they had to stop using the mana circle with a number to represent both generic and colorless mana. Changing the representation of colorless mana was easier, as it's represented far less, so they decided to make the new mana symbol

that represents one colorless mana.[7] In our example the text for Sol Ring now is "Add

". One of the consequences of introducing a colorless mana symbol was the change to over 300 cards in Oracle, the central database of official card wordings.[8]