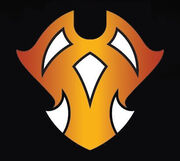 Commander 2020 or Ikoria Commander, officially styled as Commander (2020 Edition), and also marketed as Commander: Ikoria and as the Ikoria: Lair of Behemoths Commander decks, is a product in the Commander series released by Wizards of the Coast.[3] The set was released on the same day as Ikoria: Lair of Behemoths, and is marketed as an integral part of that set.[4] It was originally scheduled to be released on April 24, 2020. Due to the 2019-2020 coronavirus pandemic, the release was advanced to April 17 for Asia, and delayed until May 15, 2020 for the other continents.[5]

Commander 2020 consists of five preconstructed theme decks, the first time since Commander 2016, and features twenty premium foil commanders. The five 100-card decks contain 322 different cards in total. There are 71 new cards legal in Vintage and Legacy. These are set in the world of Ikoria, though the reprints can be from anywhere. There are a handful of cards from the main Ikoria set in the reprint slots, but the number is fairly small. These Ikoria reprints retain the Ikoria expansion symbol and collector numbers. All other cards, including the other reprints and the new cards, have their own expansion symbol and set code (C20) to set them apart.

Each package contains 1 foil oversized Commander card, a 100 card deck, 10 double-sided tokens, 1 deck box, 1 life wheel and keyword counter punch card. Each deck features 17 new cards, with some of them appearing in several decks. They also feature four legendary foils instead of the usual three, with two of them having partner with.[4] The latter represent the bonders and their monsters from Ikoria.

Color-wise, the set is enemy color themed, leaning into wedges.

There are eight non-evergreen old mechanics returning on new cards, the designers not just holding themselves to mechanics in Ikoria: Lair of Behemoths:[7] 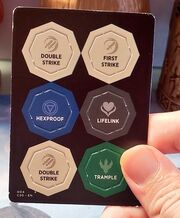 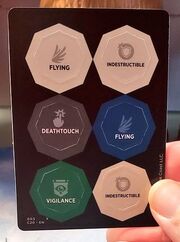 The following tokens are created by cards in the decks and are thus included with the decks. However, they are not part of the Commander 2020 expansion. Instead, they retain their Ikoria expansion symbol and collector number:

There is also a set of double-sided punch cards included in the Symbiotic Swarm deck, with each featuring 6 punch-out keyword counters. Each card face has its own collector number.[9] The first punch card is identical to the one present in Ikoria: Lair of Behemoths.

Five cycles of reprinted cards are in the following decks.

One double cycle of lands was reprinted. Each deck contains every card that can be included in the color identity.