Commander 2021 consists of five preconstructed theme decks, similar to Ikoria Commander, and features 10 playable premium foil commanders. The five enemy colored 100-card decks contain 357 different cards in total, though 28 of those (including the five basic lands) are reprints from Strixhaven, leaving 329 unique cards that bear the set symbol from Commander 2021. There are 81 new cards (#1-81) legal in Vintage and Legacy (1 commons, 70 rares, 10 mythic rares). These are set on the same plane as Strixhaven, though the reprints (#82-327 and #408-409) can be from anywhere.

The 70 new rares and 10 new mythic rares from the Commander 2021 decks are available in an extended-art version (#328-407). These may be found in a dedicated single slot of the Strixhaven: School of Mages Collector Booster.[5] These extended-art cards are only available in non-foil. Of note, the rares and mythic rares that are reprints in the Commander 2021 decks aren't found in Strixhaven Collector Boosters.

Each package contains 1 foil-etched display commander card (replacing the oversized cards from previous Commander sets), a 100 card deck (including 2 regular foils), 10 double-sided tokens, 1 deck box and 1 life wheel.[6] In addition, there are 9 punch-out counters and a divider which are part of the paper packaging.[7] Each deck features 17 new cards, with one of them (Study Hall) appearing in each deck. 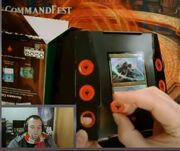 As part of a larger push toward moving away from plastic packaging, this product features reduced plastic packaging.[8] An additional "minimal packaging version" of the deck is introduced for sales online using even less material and space. This doesn't feature the design of the typical retail packaging, but uses a corrugated cardboard box to contain the product. The only difference between the minimal packaging and retail versions is that the insert tray holding the deck box does not offer punch-out counters and a divider—you'll still receive everything else (the deck and deck box, plus life wheel, display commander, and double-sided tokens).

The following tokens are created by cards in the decks and are thus included with the decks. However, they are not part of the Commander 2021 expansion. Instead, they retain their Strixhaven expansion symbol and collector number: