Not to be confused with Commander or Legends. 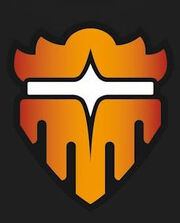 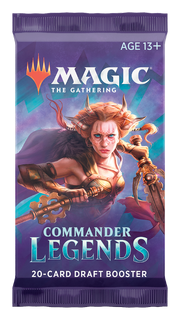 Commander Legends is the first-ever Magic: The Gathering Commander set that is designed to be drafted. It was the Innovation product for 2020, and was released on November 20, 2020.[1][3][4][5] Due to production delays, the planned release date of this set was pushed back from November 6 to November 20.[6][7]

Commander Legends is larger than a normal set, with both oft-asked-for Commander reprints and new cards. There are 165 new cards, including 71 legendary creatures and planeswalkers.[8] The cards are legal in Eternal formats like Legacy, Pauper, Vintage and Commander. The set contains 361 regular cards (141 commons, 120 uncommons, 77 rares, 22 mythic rares, 1 special) and includes randomly inserted premium versions of all these cards. There are no basic lands in the main set. The six new Commander deck cards are numbered #362-367, and the Commander Deck reprints are numbered #368-504. Basic lands are #504-511. Cards with alternate card frames have another collector number than the original version.[9] The two borderless planeswalkers are #512 and #513, foil-etched cards are numbered #514-614 and extended artwork cards are numbered #615-716. Both regular and foil versions of the borderless and extended art cards may be found in the Collector Boosters (there are no variants for the foil-etched cards). The cards with numbers #717-720 do not exist; these were going to be extended-art versions of the new Commander deck cards, but they were cut from the set (at too late a point for renumbering to occur).[10] The Buy-a-Box is #721 and the prerelease promo is #722.

The set is designed to play Limited Commander: you can play Draft or Sealed with it. It will also be available and draftable on Magic Online.

Commander Legends draft uses three draft boosters per player. For every pick, players take two cards at a time.[11] This is to ensure coherency of decks, as players will need to conform to the color identities of their eventual commanders, and for speed.

After the draft, players build a 60-card deck — much like how a traditional deck of Magic is 60 cards and a traditional draft is 40, here it's 60 to Commander's 100. All other Commander rules apply with one exception: the Singleton rule does not apply. You may play as many copies of a card as you draft of it, though given the set size compared to how many cards players get, it's not very likely to get more than 1 copy of a card.[12] Players may always use one or more The Prismatic Pipers as a commander, even if they didn't draft one.

The set features many known planes and characters as well as new ones. These cards can be from anywhere in space and time in the Multiverse: from Lorwyn to Alara, from the tales of the original Weatherlight Crew to present day.[5] 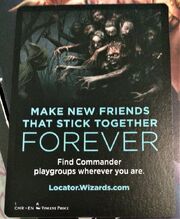 Commander Legends is sold in 20-card (draft booster) booster packs. Each booster pack contains a non-legendary rare or mythic rare, a foil and two legendary creatures (which may also be rare or higher) in every pack.[13] A 21st card is a Marketing card.[14] The set is available in English, Chinese Simplified, Chinese Traditional, German, French, Italian, Japanese, Portuguese, and Spanish. The set is also sold in 15-card Collector Boosters. Both of these types of boosters' booster boxes contain 24 booster packs. The Draft Boosters feature Jeska key art; the Collector Boosters feature art from Prossh, Skyraider of Kher.

The set introduces "foil-etched" cards, which use a brand-new foiling process that looks different from previous foils and have a special card frame.[5] 32 popular legendary creatures reprints exclusively appear into this frame. Foil-etched cards appear in both Draft and Collector Boosters, with a greater frequency in Collector Boosters.

The set is not a fixed print run,[15] and thus will be printed on demand. Boosters are more expensive than normal booster products but less expensive than Masters series boosters. Booster boxes are being sold for around $125 USD. 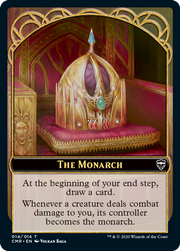 The set of course features many legendary creatures and planeswalkers to use as commanders, many of which are uncommon. There is also one legendary creature (The Prismatic Piper) that is printed at the new "special" rarity, replacing a common in about 1 in 6 draft packs.[5]

In addition, Commander Legends has three returning non-evergreen mechanics and one new mechanic.[5]

Commander Legends also features two preconstructed Commander decks that are released as a regular part of a set's product line.[1] These are meant to be on-ramps to Commander, with a few new cards (three per deck) and the rest reprints. The new cards can't be found in Draft Boosters.

The following are all new to Pauper.

For the first time, 33 commons and uncommons in Collector Boosters, namely format staples, are given extended-art frames. They are all either in the set proper, or in the associated preconstructed theme decks.[9]

^† The regular printing of this card only appears in the precon decks, and not in draft boosters.

The following 32 legendary creature reprints are available in the new foil-etched treatment.[21] All are upshifted to mythic rare and do not appear in the regular card frame.