For the app, see Magic: The Gathering Companion.

Companion is a keyword ability featured in Ikoria: Lair of Behemoths.[1][2], and the name for creatures with this keyword ability. There are ten legendary companions in Ikoria. 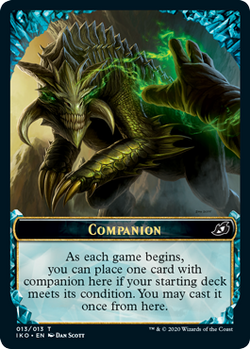 The companion ability lists a deckbuilding rule. If your starting deck follows that rule, then the creature can serve as your chosen companion.

The rules for how to bring your chosen companion into the game were introduced with the release of Ikoria: Lair of Behemoths on April 16, 2020 and updated on June 1, 2020. Both sets of rules are listed here.

Under the original Companion rules, once per game, a player can cast their chosen companion from their sideboard. Doing so follows all the normal rules for casting a creature spell, so a player can normally do so only during their main phase if they have priority and the stack is empty. Casting the companion this way brings it into the game for good, after which it can be destroyed, exiled, returned to the hand, shuffled into the library, etc. and won't return to the sideboard until the game ends.

Under the new Companion rules, once per game, any time a player can cast a sorcery, the player can take a special action and pay

to put their chosen companion from outside the game into their hand. This special action does not use the stack and cannot be responded to. Once a companion is brought into the game in this manner, it remains in the game until the game ends.

Companion
A keyword ability that allows a player to choose one creature card from outside the game as a companion if the restriction of that card’s companion ability is met. Once a player has chosen a companion, that player may pay {3} to put it into their hand once during the game. See rule 702.138, “Companion.”

Legendary Creature — Dinosaur Hippo
5/4
Companion — Your starting deck contains only cards with converted mana cost 3 or greater and land cards. (If this card is your chosen companion, you may put it into your hand from outside the game for

any time you could cast a sorcery.)
When Keruga, the Macrosage enters the battlefield, draw a card for each other permanent you control with converted mana cost 3 or greater.

Companions were made to push the design space of what was considered powerful, but they were quickly deemed too powerful. All ten of the companions were reasonably-sized creatures, some with further engine capacity. The power level of these cards was so great that they even upset several eternal formats.[4] Less serious, but still prominent for the health of the game, was the fact that the companion mechanic provided players with access to the same cards every game lead to extremely repetitive games. One of the most prominent companions was Lutri, the Spellchaser, whose restriction of "each nonland card in the deck must have a different name" was inconsequential for Commander; this caused the Commander Rules Committee to ban it on release day.

The deckbuilding restrictions, which were intended to balance the companions, turned out to only be a minor inconvenience in multiple formats. The most egregious was Lurrus of the Dream Den, whose restriction was "no permanent cards above 2 CMC". For most decks in the eternal formats (Modern, Legacy and Vintage), this was only a minor sacrifice, as three-mana permanents are often already considered expensive haymakers in these high-powered formats, and its continuous ability to recast these permanents provided incredible value for effectively all decks that have any permanents at all. It took less than two weeks for Lurrus decks to take over and dominate the eternal formats. Lurrus was soon banned in Legacy, but although it was causing just as much trouble in Vintage, it couldn't simply be restricted there, as players only needed one copy of it anyway due to the Companion mechanic. Thus it was banned in Vintage, obtaining the infamy of being the first card banned in this format for power level reasons since Mind Twist was banned in 1996.

After banning Lurrus in Vintage and Legacy and Zirda, the Dawnwaker in Legacy, Wizards of the Coast announced that if Companions would cause long-term health issues in other formats, they would be willing to take steps up to and including changing the rules of how the companion mechanic works.[5][6] They followed through with their announcement a few weeks after this announcement, and the keyword received a rules change to how it is now.[7]

Due to such unprecedented events, players questioned the capability of R&D and especially Play Design, which lead to Mark Rosewater questioning if pushing into unexplored space should outweigh game balance.[8] He later admitted that Companions were the biggest design mistake of the year in which they came out, though he believed they could have been very popular if executed correctly.[9] As a result of the rules changes, Lurrus was eventually unbanned in Vintage on February 15, 2021.