Conspiracy: Take the Crown is a booster-based set designed for Conspiracy Draft.[2] It was released in August 2016 as the second of three supplemental sets that were released in the summer of 2016.[3]

Conspiracy: Take the Crown followed up on the original Conspiracy set from 2014 and introduced new cards that affect the draft itself as well as new Conspiracies. It is designed for eight-player drafts followed by free-for-all games of three to five players each. The set contains 221 cards (90 common, 67 uncommon, 50 rare, and 14 mythic rare). Eighty cards (including 12 Conspiracies) are new cards with mechanics that enhance multiplayer play, and the other part features reprints. The planeswalker card Kaya, Ghost Assassin has alternate art in foil, with the foil having the collector number 222/221. The new cards are not legal for play in the Standard or Modern formats.[4]

The set is printed in English, Japanese and Chinese Simplified. It was not released on Magic Online. North American mass-market stores sold new Draft Packs for this set. The Draft Pack features three Booster Packs.[5]

Brago, the King Eternal ruled the High City of Paliano on the plane of Fiora. When he died, the priesthood — the Custodi — kept his spirit as a figurehead and were able to retain their command for a while. However, The Black Rose confiscated the throne after Brago's spirit was eliminated by the planeswalker Kaya. Nobody knows how long she will last.

The logo of the February 22 announcement

The logo of the February 24 announcement 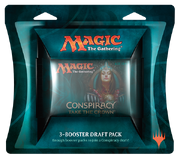 The set was initially announced as Conspiracy: The Reign of Brago.[6][7] However, the day immediately after the initial set announcement, official twitter announced The Reign of Brago would not be the set name, along with a picture showing the apparent assassination of Brago's spirit.[8] The set was renamed on February 24 to The Empty Throne to reflect this plot twist.[9][10] Also the number of cards was reduced from 221 to 220 (Brago's spirit was eliminated, so clearly there would be one less card) and the quote was changed from “Long May He Reign” to “The King Is Dead, Long Live the King”.

Two days later the title was changed one final time, along with the reveal of the set symbol. The card count for Conspiracy: Take the Crown was now up to 221 again with the new queen added. The slogan was also changed, this time to “You Stab My Back And I'll Stab Yours”.[2][11][12]

On the back frame of every token of Eternal Masters, the previous booster set, appeared some seemingly random and mysterious lines of text. These were part of a teaser puzzle. If the tokens were lined up in the right order, the text on the top and bottom of the tokens provided a proclamation by her majesty Queen Marchesa, the Black Rose, first of her name. The text on the sides of tokens provided a revolutionary speech by Captain Adriana.[13] Marchesa's proclamation was later published on the Magic website, as was Adriana's response.[14][15]

Conspiracy: Take the Crown features one marker and eleven tokens.[16]

The monarch is a new designation that a player may have during the game. Only one player at a time can be the monarch and has the following ability: "At the beginning of the monarch's end step, that player draws a card." Secondly, several cards in the set get better if you're the monarch.[17] A mistake realized only after printing, The Monarch marker reads "At the beginning your end step, draw a card." with the "of" missing. 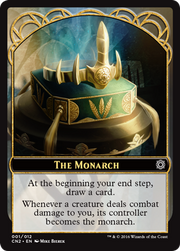 Hidden agenda is carried over from Conspiracy. Conspiracies with hidden agenda have you secretly name a card before the game begins. Any time you have priority during the game, you can turn the conspiracy face up and reveal the chosen name and what bonus the conspiracy provides.

There are four new named mechanics:[19]

There are three draft ability card cycles, one for each rarity besides mythic.

Conspiracy: Take the Crown has one mirrored pair: