Copy effects were introduced in Alpha, on the cards Clone and Vesuvan Doppelganger.[1] These effects can create or turn an object into a copy of another. When creatures are copied, this mechanic is sometimes referred to as "cloning".[2][3][4]

The exact result of a copy effect is a common source of confusion. In most cases, a copy is created with only the printed qualities of the original, ignoring any temporary changes to that object. 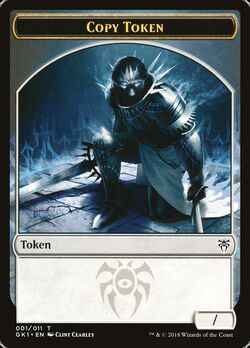 Copy token from the Guilds of Ravnica Dimir Guild Kit

Copying permanents permanently is primary in blue.[5] It has permanents that will choose a permanent and then remain that permanent for the rest of the game (or until the permanent chooses to copy a new permanent). Green can copy it’s own creatures. White can copy tokens.[6]

Lithoform Engine was the first card to feature the line "Copy target permanent spell" in the rules text (as opposed to "copy instant or sorcery spell").[7]

Copying permanents temporarily is primary in red and secondary in blue.[5] Red has permanents (or spells that create this effect) that can temporarily become another creature, usually until end of turn. Blue's cards in this category are cards that change but don't let the controller explicitly choose what they become (for instance, one might copy the last creature played.)

Copying spells (Copy target instant or sorcery spell. You may choose new targets for the copy.) is primary in both blue and red.[5][6] This ability is mostly done at rare.

The copiable values of an object are its name, mana cost, color indicator, card type, subtype, supertype, rules text, power, toughness, and loyalty. These values are usually copied exactly as printed. However, copy effects do respect changes to those values resulting from other copy effects, face-down status, and some effects that set a creature's power or toughness. The last are only considered if they have the wording "as [the object] enters the battlefield" or "as [the object] is turned face up".

Additionally, for objects on the stack (that is, spells or effects that have not yet resolved), copies also copy any choices made while casting it, such as mode, targets, or additional or alternate costs that were paid. Many, but not all, effects that copy spells allow the controller of the copy to choose new targets for that copy.

Counters on the object being copied and objects attached to it, such as Auras or Equipment, are not copied, and neither are the effects granted by them.

The collective status of the original object is also not copied. Unless otherwise stated, the copy will be created untapped, unflipped, face-up, and phased-in. This leads to an important distinction and oddity regarding copies of face-down creatures. A copy of such a creature will acquire the copiable values of the original face-down creature, and become a 2/2 colorless, costless, nameless, subtypeless creature, but it will instead be face-up. Such a copy is unable to morph, and never acquires the face-up characteristics of the original creature.

Copy effects form layer 1, the lowest and earliest layer, in the layer system dictating the interaction of continuous effects. This ensures that the copiable values of an object are unchanged from the printed values at the moment that copy effects should apply.