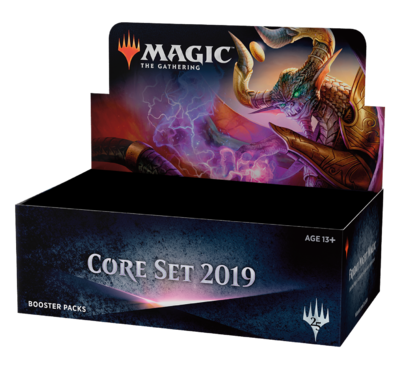 Core sets were discontinued after Magic Origins in 2015, but were reintroduced with Core 2019. The reintroduction made it possible to move away from the Two-Block Paradigm, and create room to print three large standalone sets each year.[4] Thus, the codename Salad was transferred from the small set in the proposed Dominaria block, to this core set.[5][6] Like Magic 2010 to Magic Origins before, this core set contains a mix of new and reprinted cards. However, it is primarily geared toward incoming players.[7] In contrast to earlier Core Sets, the design team started out by building the Welcome Decks and Planeswalker Decks. They had the freedom to design or reprint whatever cards they needed to make an optimal experience. The team then used the cards they made for those two products as a starting point around which to build Core Set 2019.[8]

More than 30 white, blue and red commons were accidentally packaged in Dominaria boosters and found two months before release.[11][12][13]

Due to the transition from the Two-Block Paradigm to the Three-and-One Model Core Set 2019 is one of the few Core Sets with a development codename.

Core Set 2019 features a story arc by Kate Elliott, focusing on the origins of the main antagonist of the current storyline, Nicol Bolas, and his conflict with Ugin, his twin.[14][15] The cards also show bits and pieces of unrelated stories on several other planes. The set is filling in the story and not part of the current storyline. To avoid confusing less enfranchised players there are no Story Spotlights.[16]

Core Set 2019 is sold in 16-card boosters (one card being a marketing card), five welcome decks, five planeswalker decks, the Core 2019 bundle and a Deck Builder's Toolkit.[17] The expansion symbol of the set picks up the design earlier used for Magic 2010 to Magic 2015, though with the modernized font. The boosters feature art from the five planeswalkers, featured in the Planeswalker decks.

Five Welcome decks are given away to new players for free.

The Welcome decks, Planeswalker decks, and Deck Builder's Toolkit are strongly integrated, which allows for an easier transition between the products. Basically, the Planeswalker decks expand on the themes presented in the Welcome decks.[18] Furthermore, the contents of the Deck Builder's Toolkit are entirely fixed and can be used to upgrade the Planeswalker decks.[18] The next step is a booster pack. Because of this, Core Set 2019 is positioned as an introductory booster product for new players.[8] However, the cards targeted to beginning players are mostly found in common and uncommon. This opens up the opportunity to add cards to fill up gaps in creative, mechanical themes, answers or formats in rare and mythic rare.[8] This is also the place for high demand reprints.

The creative team also used the set to take some peeks into the larger world of Magic and give a few hints at things that are going on around the Multiverse.[8]

Core 2019 comes with 14 tokens, three emblems and a checklist card.

Token and emblems appear in the marketing card slot.

The checklist card appears in the basic land slot.[20]

The Gift Pack for the 2018 holiday season (released November 16, 2018) is integrated with Core Set 2019. It contains four Core Set 2019 boosters, five premium lands, a Spindown die, and five creature cards exclusive to the Gift Pack. The exclusive cards are considered part of Core Set 2019 for legality and rotation purposes. They have the M19 expansion symbol, but are numbered #GP1/001 to #GP1/005.[23]

The set features one Transforming Legend similar to those featured in Magic Origins: a double-faced mythic creature that transforms into a planeswalker when a certain condition is met, a condition that represents the event that caused that character's planeswalker's spark to ignite. Nicol Bolas, the Ravager is the only double-faced card in the set.[24]

The set does not feature any other new or returning non-evergreen mechanics.[25] The complexity of the set is toned down to make the learning curve a little less steep. There are a few more vanilla creatures and Lords than in regular sets. On the other hand, the set is also seeded with several combos.[25]

Core Set 2019 has twelve cycles, one of which is a double cycle, and five of which can only be found in preconstructed products (and subsequently not in booster packs). There is additionally one partial cycle, themed around the character Nicol Bolas:

Core 2019 features five planeswalker decks, that come with only one booster and are designed to integrate with the welcome decks.[27][28]