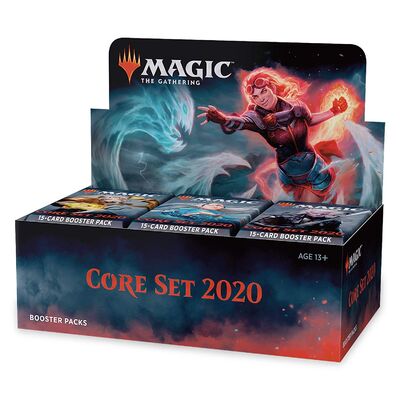 Chandra Nalaar is the face of Core Set 2020 card set, and is represented by three different planeswalker cards in different rarities and depicting several facets in her life.[8][9] A fourth Chandra planeswalker card is included in the Chandra Planeswalker Deck.[6]

Starting with tabletop Core Set 2020 Preleases on July 5, the London mulligan will be used for all play.[6] It became officially reflected in the Comprehensive Rules with the M20 rules updates on July 12.[10] To take this mulligan, a player shuffles the cards in their hand back into their library, draws a new hand of cards equal to their starting hand size, then puts a number of those cards equal to the number of times that player has taken a mulligan on the bottom of their library in any order.

Core Set 2020 has a small flavor theme focusing on the life of Chandra Nalaar.[9][11] There are no Story Spotlights, and there was no story support for the set.

Like with its predecessor, the Welcome decks, Planeswalker decks and Deck Builder's Toolkit are strongly integrated, which allows for an easier transition between the products.[11][13] The Spellslinger Starter Kit is now also part of the line up.[14] Throughout the product line the colors have a central theme:

Core 2020 comes with 10 tokens and 2 emblems. Token and emblems appear in the marketing card slot.[7]

The set features the following limited archetypes, which focus on the ally-colored pairs within each wedge:

The enemy colored signposts connecting the two archetypes which they are part of:

There are no new, or non-evergreen returning, mechanics in the set. Protection returns back to evergreen on a probationary status.[2][21]

Core Set 2020 has twenty cycles, including one double cycle and one vertical cycle.

Core 2020 features five planeswalker decks, that come with only one booster and are designed to integrate with the welcome decks.[5][16]