For other uses, see Counter (disambiguation).

Certain spells and abilities can "counter target spell" (or similar effects). Counter in this sense is an evergreen keyword action.[1] A spell that is countered is put into the graveyard instead of doing its effect. It is essentially negated.

Counterspells or permission spells may or may not have conditions, such as forcing a player to pay an additional amount of mana.[2][3][4]

More often than not, counterspells cards are blue. White is tertiary.[5] Counterspells in other colors used to exist only in the early days of Magic, and in the alternative realities of the Time Spiral block. However, the most recent off-color counterspell is Kaldheim's Tibalt's Trickery which is red.

Counter
1. To cancel a spell or ability so it doesn’t resolve and none of its effects occur. See rule 701.5, “Counter.”
2. A marker placed on an object or player that modifies its characteristics or interacts with a rule or ability. See rule 122, “Counters.” 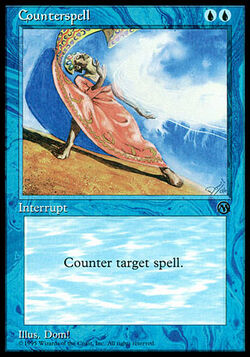 "Permission" is a style of play that involves hardcore/dedicated counter-magic.[6][7] The permission player attempts to counter every important spell the opponent plays, and simply to draw plenty of extra cards to ensure more counters are available. The term "permission" comes from the way the opponent will end up asking whether each of their spells resolves or is countered.

, was a staple in many blue decks. It was also a staple in core sets and multiple expansion sets, up until 8th Edition and Mercadian Masques, respectively, until it was gradually replaced with other spells like Mana Leak.

Counterspell was ultimately supplanted by Cancel, a permission spell costing an additional

that was introduced in Time Spiral, because R&D decided that

In the Time Spiral block white took over blue 's role as the main counter color (Mana Tithe, Rebuff the Wicked, Dawn Charm). White has only dipped its toe into the ability with on-board taxing effects rather than as in-hand permission, which tends to give the opponent full information. Such an effect has not been done since Gatecrash in 2013.

A distinction is made between so called "hard" and "soft" permission spells.

As a general rule of thumb, R&D stipulated that "hard" counters require

in their mana costs and that counterspells are designed and costed with the original Counterspell in mind.[11] Exceptions are sometimes made when the spell has a significant downside, such as card draw for the controller of the countered spell (e.g., Arcane Denial, Vex) exist.[11] R&D later decided that two colored mana was also allowed, allowing multicolored hard counterspells with one blue mana and a mana of a second color (e.g. Psychic Strike

A "soft" counter, in contrast, is a card that stops a spell from resolving but gives the opponent some recourse, such as the possibility to pay additional mana to have the spell still resolve (e.g., Force Spike, Mana Leak) or the possibility to cast that spell soon (e.g., Delay, Remand, Memory Lapse).[11] Counterspells that also have a limited range of targets (e.g., Annul, Spell Snare, Negate) or that require additional resources (e.g., Abjure) are also considered "soft" counters.[11]

The ability to Counter target activated or triggered abilities, is primary in blue and secondary in green. For a while this was a green effect, but R&D has moved it to be more in blue.[5]

Some cards can't be countered. This ability is primary in red and green, and secondary in blue.[5]