Dakkon Blackblade was an ancient planeswalker who was forced into the service of Geyadrone Dihada.[2][3][4] He was also referred to as the "Shadow Slayer" and "Dakkon the Avenger".

Dakkon, Bearer of the Blackblade

As a mortal, Dakkon was a master blacksmith and a warrior. One day, he was visited by the planeswalker Geyadrone Dihada, who offered to make him a planeswalker if he would make her the most powerful blade in existence, the Blackblade. He agreed and she shared with him the secret sorceries required to make the sword a "soul-drinker", a blade capable of stealing the energy of those it killed. Dakkon claimed to have stood at his anvil every day for ten years, cooling the blade by killing a slave with it after each time he heated it. Finally, the blade was completed, and Dakkon could not help but test it.

Dakkon waded into battle and, with each kill, felt his strength grow. So ferocious was his assault that as tales spread of his slaughter, his name became "Dakkon Blackblade". Dihada returned when she heard these stories and did make him a planeswalker, having sensed the spark within him when they first met but immediately afterward she stabbed the sword into Dakkon's shadow and absorbed his soul but not his life. Plunging the Blackblade into Dakkon's shadow, she bound his soul into the blade as his planeswalker spark ignited. Dakkon was left wandering the plane, wondering why Dihada would grant him so much power, only to make him her enemy. 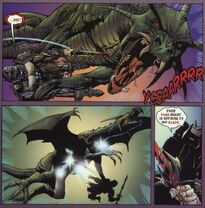 Many years later, Dihada began a war on Corondor. A young thief from the fallen kingdom of Carth fell to Dihada and was imprisoned within her dungeons. With the help of a monk in the same cell, the young man escaped. The boy (known as the Son of Carth) used the Amulet of Ti-Fu to bind himself to Dakkon, robbing Dakkon of the ability to planeswalk away. Dakkon was not so easily won over though and attacked Carth, intent on slaying him and ending his servitude, but the amulet protected Carth and left Dakkon with no choice but to serve. Serve he did, happily, when he learned of Carth's enemy, Dihada herself. Dihada heard of the two, and sent her corrupted Maro-Sorcerer, Sol’Kanar, to slay the pair. Her plans did not go as she anticipated, because Dakkon bested the nature spirit. Dihada made herself known then, laughing as the combatants fought for her pleasure. She summoned the Elder Dragons Piru and Chromium Rhuell to attack Dakkon, considering Carth below her notice. Carth managed to sneak close enough to reclaim the Blackblade. Dakkon used his power to banish Chromium immediately. Piru then fought him but was killed when Dakkon stabbed her with the Blackblade, which Carth had returned to him. This released a massive energy blast that created the Dueling Chasm of Golthonor.

This was all exactly as Dihada had planned, as she absorbed the power of Piru's soul and took on her true demonic visage. She then revealed to Carth that the monk that had set Carth upon his quest was none other than Dihada herself. The entire thing had been an elaborate plot to empower her with Piru's soul, but she was abruptly cut off as Dakkon struck at her. Unfortunately, Dakkon's great power paled and Dihada left her mark on him, saying he would serve for all eternity. Dakkon cursed the boy for having ever summoned him in the first place, but Carth had seen something Dakkon had missed. Dakkon's shadow had returned.

He and the boy traveled to Terisiare, where the boy started the Carthalion legacy, named after Dakkon's nickname for the boy, "Carth the Lion". After the boy died, Dakkon probably served as Dihada’s main warrior. Ages later, Dihada and Dakkon were present during the Planeswalkers' War of Corondor. One of the key players during this war was Jared Carthalion, the last surviving member of the Carthalions, but it is unknown how Dakkon interacted with him, what his other actions in the war were, or even if he survived.

An undisclosed time later an undead being named Korlash claimed the Blackblade, but it hasn't been revealed yet if he did so before or after becoming a zombie.

The Blackblade would later come into the possession of the Cabal minion Needle, and its origins were rewritten by the Cabal to having been forged by the Cabal's new leader, Belzenlok.[5] Later, the planeswalker Gideon Jura used the Blackblade to attack Nicol Bolas, but the sword broke against the Elder Dragon's flesh.[6][7] Bolas revealed that he had enchanted the Blackblade in the past, so that it would never be able to hurt another elder dragon again.[8][6]