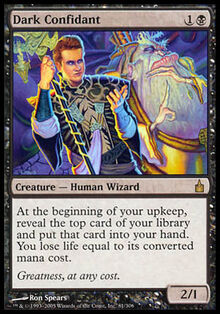 Dark Confidant (also affectionately known as "Bob"), released in Ravnica: City of Guilds, is a rare, black creature that allows its controller, at the beginning of his or her upkeep, to effectively draw an additional card at the cost of paying life equal to the card's converted mana cost.

Dark Confidant is so nicknamed after Bob Maher, Jr., its creator. Maher won the right to design and be immortalized in his 2004 Magic Invitational submission. The card's flavor text alludes to Maher's epithet "the Great One". Dark Confidant was reprinted in Modern Masters.[1]

Dark Confidant's effect can dramatically change the way a deck wants to play out. Drawing an extra card per turn should lead fairly directly to playing an extra card per turn, while simultaneously reducing the number of lands required to make each land drop. A turn by turn analysis follows, so that it can be compared with the theoretical basic curve. Note that this analysis is identical to the one which would occur for Howling Mine and several other cards. The first analysis shall assume we are on the play.

First turn: The Dark Confidant cannot affect our draw on the first turn so this is the usual minimum 9 one-drops to have drawn one and similar 9 lands, totaling 18 cards.

Second turn: Again, the Confidant does not affect our draws so we still have the "basic curve" which tells us we want 8 two-drops and 15 lands, bringing our running total to 32 cards.

Third turn: Henceforth, we will assume that we have drawn and played a Confidant on turn two to give the most extreme variation from the basic. This turn, having drawn two cards we want to play two spells and make our third land drop. So we should have our third land, second one-drop and second two-drop in these 10 cards. Now we have 12 one-drops, 12 two-drops, and 18 lands, for a total of 42 cards.

Fourth turn: This turn we play two two-drops and one land, which means we desire 20 of each in the deck, for a total of 52 cards.

Fifth turn: Another land, two-drop, and finally a three-drop lead us to 22 two-drops/land, and four three-drops, totaling the deck out at 60 cards.