Edit this Page
watch 02:40
World of Warcraft: Dragonflight - The Loop
Do you like this video?
Play Sound

Day and night are designations that a game of Magic: The Gathering can have, which changes the behavior or even the identity of certain cards, particularly those with daybound and nightbound. Either day or night is first applied to a game when a relevant card is played, and subsequently the two designations alternate back and forth based on the number of spells cast each turn, or by specific effects. Day and night were introduced in Innistrad: Midnight Hunt, as a refinement of mechanics which first appeared in Innistrad.[1][2]

When the game starts, it's neither day nor night. In most games in which the mechanic is used at all, it will become day first. The most common way that will happen is if a permanent with daybound appears on the battlefield. It may become night first through the effect of one of two spells (Unnatural Moonrise and Into the Night). After it becomes day or night, the game automatically begins checking if it will switch between day and night each turn based on the number of spells cast in the previous turn, creating an ongoing cycle between the two designations. It can also switch one way or the other due to specific abilities.

Once it's day or night, the game will be exactly one of those designations, day or night, going back and forth until the game ends. It can never return to being neither. Day, night, and transitions between them apply to the entire game, not just one player at a time or to each player separately.

Once the day/night cycle begins, the game rules check each untap step for a condition to be met, which will automatically cause day to turn to night or back again:

These conditions are close to the triggered abilities of Werewolf double-faced cards printed in Innistrad block and Shadows over Innistrad block. The biggest difference is that only spells cast by the active player in the previous turn count for the condition, rather than spells cast by all players. A smaller one is that this change and corresponding transformations happen during the untap step all at once, whereas the earlier abilities triggered separately during upkeep.

Another way the day/night designation can change is when cards have effects that simply say it becomes day or night. This can happen at any point in the turn when the effect says so.

A number of cards have triggered abilities which trigger when day becomes night or night becomes day. Since this event usually happens during the untap step when no players get priority, in those cases the abilities go on the stack at the beginning of the upkeep step.

To help keep track of day and night, some Innistrad: Midnight Hunt products provided a two-sided helper card that reminds players of these rules. 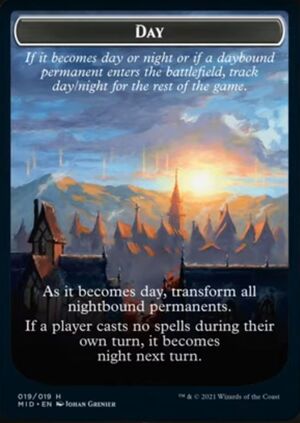 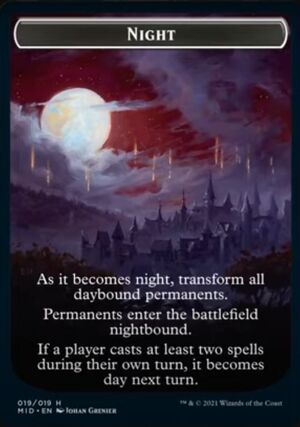 From the Comprehensive Rules (April 29, 2022—Streets of New Capenna)