Defeat a God is a Challenge Deck that was used at the Journey into Nyx Game Day. The deck features the revelling Satyrs of Theros, and the ascended Xenagos.[1] 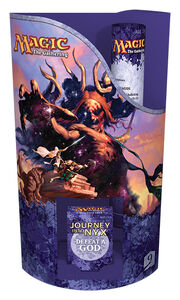 The Challenge Deck is a special self-running deck with its own set of rules, which are printed on the Game Day vinyl playmat. A paper copy of the playmat is included with each Challenge Deck. The 60 card deck contains 15 different cards, which for the first time include enchantments. The God may be battled with the customized "Godslayer" forged by the player in step #7 of the Hero's Path.

How to play[edit | edit source]

The challenge uses the regular Magic rules, with the following exceptions: