For the plane, see Dominaria (plane).

The expansion code of Dominaria is named as DOM in the information below the text box, but DAR seems to be used by Wizards as well.[5]

Dominaria is the first set to follow the Three-and-One Model, which abolished blocks. Richard Garfield is on the design team, for the first time since the original Innistrad set.[4] It contains 269 cards (20 basic lands, 101 commons, 80 uncommons, 53 rares, 15 mythic rares), and includes randomly inserted premium versions of all cards. Ten additional cards are found in the set's planeswalker decks (2 mythic planeswalkers, 2 rares, 2 uncommons, 2 commons, and 2 common dual lands). These are numbered #270/269 to #279/269. A unique Buy-a-Box promotional card numbered #280/269 is also considered to be part of the set.[6] Nostalgia and legendary creatures are major themes. Each booster contains at least one legendary creature,[6][7][8] though this does not apply to the 8-card booster packs on MTG Arena.[9] The expansion symbol depicts a Benalish shield.[10] Because of its similarity to the Darksteel symbol, the common version has an inverted color scheme (more white than black).[11][12][13][14] As a gimmick, all the names of sets taking place on Dominaria (including Alpha, Beta, Revised, Unlimited and Origins) or Rath (which was overlaid with Dominaria) are mentioned in card names or flavor text.[15] Five of the basic lands feature a tiny silhouette of the Skyship Weatherlight in their art. Starting with Dominaria, Wizards of the Coast applies a new coating method for cards in English booster packs.[16]

A substantial part of the set was accidentally spoiled six weeks before release, when Wizards of the Coast China published the release notes for Dominaria, instead of those for Masters 25.[6][17] 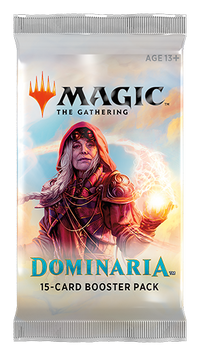 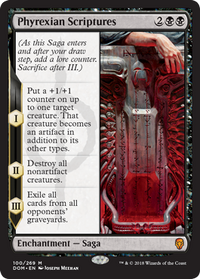 Dominaria is set on the plane of the same name, for the first time since the Time Spiral block (or Magic Origins if sets involving multiple planes are included). Sixty years after the Mending, this world is healing from its wounds. Returning legendary characters are Teferi, Jhoira, Jaya Ballard, and Karn.[18] Dominaria’s story starts right after the events of Hour of Devastation. Gideon and Liliana have arrived on Dominaria following the Gatewatch’s defeat at the hands of Nicol Bolas. Together, they begin a mission to kill Belzenlok, the final demon holding Liliana’s contract.[19]

The cards that represent the Story Spotlights in Dominaria are: Broken Bond; Final Parting; Settle the Score and In Bolas's Clutches.[6] 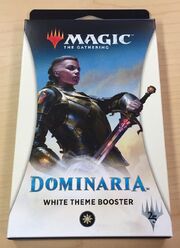 Dominaria is sold in 16-card boosters (one card being a marketing card), two planeswalker decks and the Dominaria bundle. The boosters feature artwork from Karn, Scion of Urza, Teshar, Ancestor’s Apostle, Jaya Ballard, Shalai, Voice of Plenty, and artwork of Teferi not used by any card (which also was used in the package in Teferi's planeswalker deck).[24] With the release of Dominaria, Wizards of the Coast began testing a new product at 300 Walmart locations across North America called the “Dominaria Theme Booster”. These contain 35 cards (a variable amount of commons and uncommons, and 1 rare or mythic rare) from a given color or theme. The MSRP is $6.99. By limiting this test to a single large account, WotC hoped to perform a controlled test that allowed them to more efficiently and accurately interpret sales results that would help inform future decisions about this kind of product.[25] Color boosters may contain artifacts, as well. As a test, players in New Zealand were able to get MTG Arena codes inside select Dominaria booster packs, providing Closed Beta access as well as in-game items.[26]

History is the major theme for Dominaria,[37] examplified by a significant number of legendary creatures and other legendary permanents. There is also a tribal theme for the Wizard class, with several cards costing less when you control a Wizard.[38] A minor Knight tribal theme was taken from the never completed second Dominaria set, codenamed Salad.[39]

The set debuts legendary sorcery cards that capture extraordinary moments from main characters' pasts.[40] These powerful spells can only be cast while you control a legendary creature or planeswalker.

The set sees the return of kicker, a keyword ability that allows the player to pay an extra cost for a bonus effect.[40] Kicker was first featured in the Invasion block and last seen in the Zendikar block. Crew is used for the Weatherlight Vehicle.[4]

Dominaria introduces "Hexproof from [quality]" as a variant of the hexproof ability.[40] "Hexproof from black" means "This permanent can't be the target of black spells your opponents' control or abilities of black sources your opponents' control." It also introduces "equip [quality] creature" as a variant on equip. For example, "equip legendary creature" means "this equip activated ability can only target a legendary creature."

Double is a keyword action formally introduced for Grunn, the Lonely King.

The set introduces a new enchantment subtype: Saga.[40][43] Each Saga tells the story of a key event from the past as it unfolds during each of the player's turns. As the Saga enters the battlefield and after the player's draw step, that player adds a lore counter, which triggers the appropriate chapter ability. Once all abilities have been triggered (for Sagas introduced in Dominaria, each has exactly three), the Saga is then sacrificed. Saga cards have a special vertically-aligned frame treatment.[44] The rules text with the three chapter abilities is on the left side, and the art is on the right side.

Historic is a new game term that refers to a card that has the legendary supertype, the artifact card type, or the Saga enchantment type.[40][45] Some abilities trigger "whenever you cast a historic spell."

Many cards reference past cards and places from past blocks set on Dominaria.