The two decks represent humans and their allies fighting dark forces over control of the plane of Innistrad. They contain six preview cards for Shadows over Innistrad: Topplegeist, Eerie Interlude, Pore Over the Pages, Tooth Collector, Mindwrack Demon (alternate art), and Compelling Deterrence.[3]

The Duel Decks include a Magic “learn to play” guide, a strategy insert, a spindown life counter and 5 tokens each.

A divine mission has once again united the Humans, Spirits, and Angels of Innistrad. Together, these protectors will stand against the shadows, fighting for humanity's salvation. Evil rules the night. Shambling hordes of the dead roam free, their cemetery gates in ruins, as powerful Demons soar overhead. The fate of the living remains shrouded in darkness. Will you defend hope or snuff it out?

1 Champion of the Parish

1 Captain of the Mists

1 Slayer of the Wicked

1 Voice of the Provinces

1 Pore Over the Pages 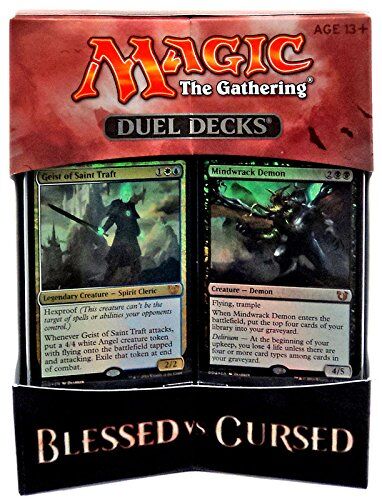 The rares in this deck are Geist of Saint Traft (mythic), Champion of the Parish, Captain of the Mists, Dearly Departed, Increasing Devotion, and Eerie Interlude.

1 Driver of the Dead

2 Moan of the Unhallowed

The rares in this deck are Mindwrack Demon (mythic), Gravecrawler, Unbreathing Horde, Havengul Runebinder, Harvester of Souls, and Sever the Bloodline.